*Not compatible with Hiperfire Triggers

As a firearms enthusiast, you know that sometimes the devil really is in the details. Little things like an inconvenient or difficult to operate safety switch can make an otherwise awesome rifle a pain in the neck to shoot. Something as seemingly small as an AR-15 ambi safety can be the difference between a great build and the rifle you only reach for when you’re working on your favorite.

The craftsmen of Strike Industries have created their business around improving the little things that are the difference between a fully customized rifle and one that's just a modified version of someone else’s plan. Their answer to the problems frequently encountered with safety selector switches is the Strike Industries Strike Switch. The Strike Switch is an ambidextrous safety selector designed to be used without changing your grip from firing position whether you are right or left handed.

In the name of full customization, Strike’s ambidextrous safety selector even allows for adjustment in operation. Choose either a 60 or 90-degree throw depending on your personal preferences. Of course, while looks aren’t everything, attention to finish isn’t something Strike Industries overlooks. You can order your Strike Switch ambidextrous safety selector in basic black or grey to blend in with the rest of your components. If you want to get noticed, choose blue or red to add a little extra pop to your next build. 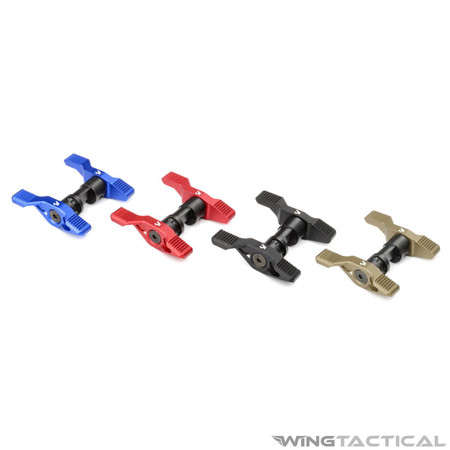