Don’t hold back, if you don’t want to. But, if you do guess what? RailScales says that’s okay pushing forward is fine too. I’m talking about your weapon and the innovative RailScales Handstop. Whether you like your forward hand to apply pressure against, or away from you; this baby will do the trick.

Whether you prefer the KeyMod or M-LOK System the Karve Handstop has got your back. Over here in the good old U.S.A., those guys at RailScales know people are different. RailScales engineers designed this Karve Handstop to fit everyone. Thanks to their innovative COG Multi-Mount System, no matter which rail system you have or how you like to hold your weapon the RailScales Karve will work for you. RailScales’ approach to the multi-rail mounting systems is the beginning of the future. This little sucker is reversible. You can switch it around in a flash. It doesn't matter which rail system you use, it’s in there like bam!

The RailScales Handstop is machined from solid Billet Aluminum. That makes it lightweight, and tougher than nails. Its low profile beneath your rail won’t hang up on everything. I don’t mean to but sometimes even I forget to strap something down. The RailScales Karve wears a tough anodized finish you’re going to love under your rail. To go with your current handguard finish, the Karve Handstop offers you three color options. You can get it in Carbon Black, Orbital Grey, or Terra Bronze. So, pick one, or get all three. 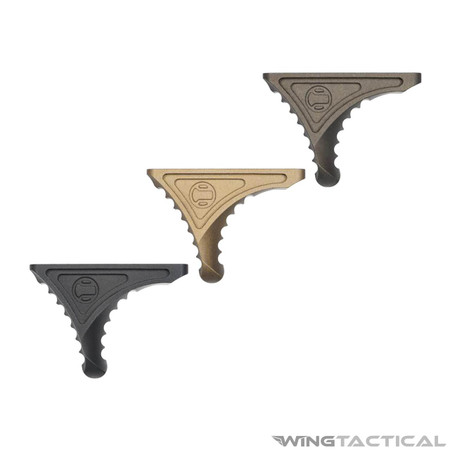