If your AR-15 needs a new magazine catch, the Strike Industries enhanced magazine catch is just the thing for you. The solid construction and the sleek black matte finish of this AR-15 mag release will complement your black rifle very nicely.

Factory-installed magazine releases button are known to be difficult to operate. The ability to quickly drop your expended magazine and pop in a full one could mean the difference between life and death in the most severe circumstances. In circumstances with lesser stakes, it could simply mean that you missed the target during a shooting competition. If you are often in circumstances where every second counts, you most certainly won’t appreciate being slowed down by a magazine release.

Strike Industries enhanced magazine catch is conveniently located on the side of your firearm’s receiver. Disengaging an empty magazine and sliding in a new one is a piece of cake with this AR-15 magazine catch and release bottom.

An AR-15 often represents a large investment. Whether you’re building an AR from scratch or simply replacing a factory magazine release to improve functionality, this AR-15 mag release by Strike Industries is certain to meet your requirements. Order yours today and begin your experience with an AR-15 magazine catch of the highest quality.

Strike Industries has been committed to providing gun owners with parts and accessories of the very highest quality since its inception in 2011. The operators of the company are all avid gun owners themselves, making them especially qualified to design accessories to truly benefit those who use them. 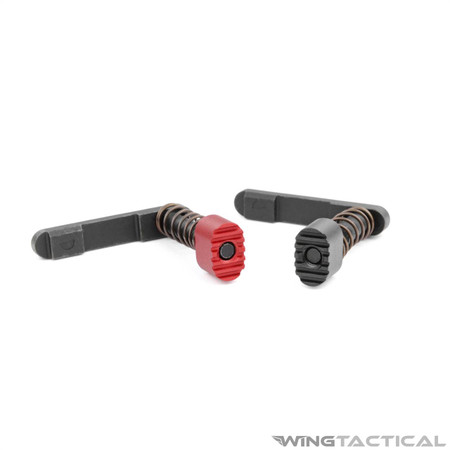