The debate over Mil-Spec vs. commercial AR-15 buffer tubes (officially referred to as the receiver extension) has been raging for decades. While they both accomplish the exact same function, there are very real differences between the two. Anyone who is upgrading their AR-15 stock or planning a custom AR build need to understand these differences to make an informed decision. 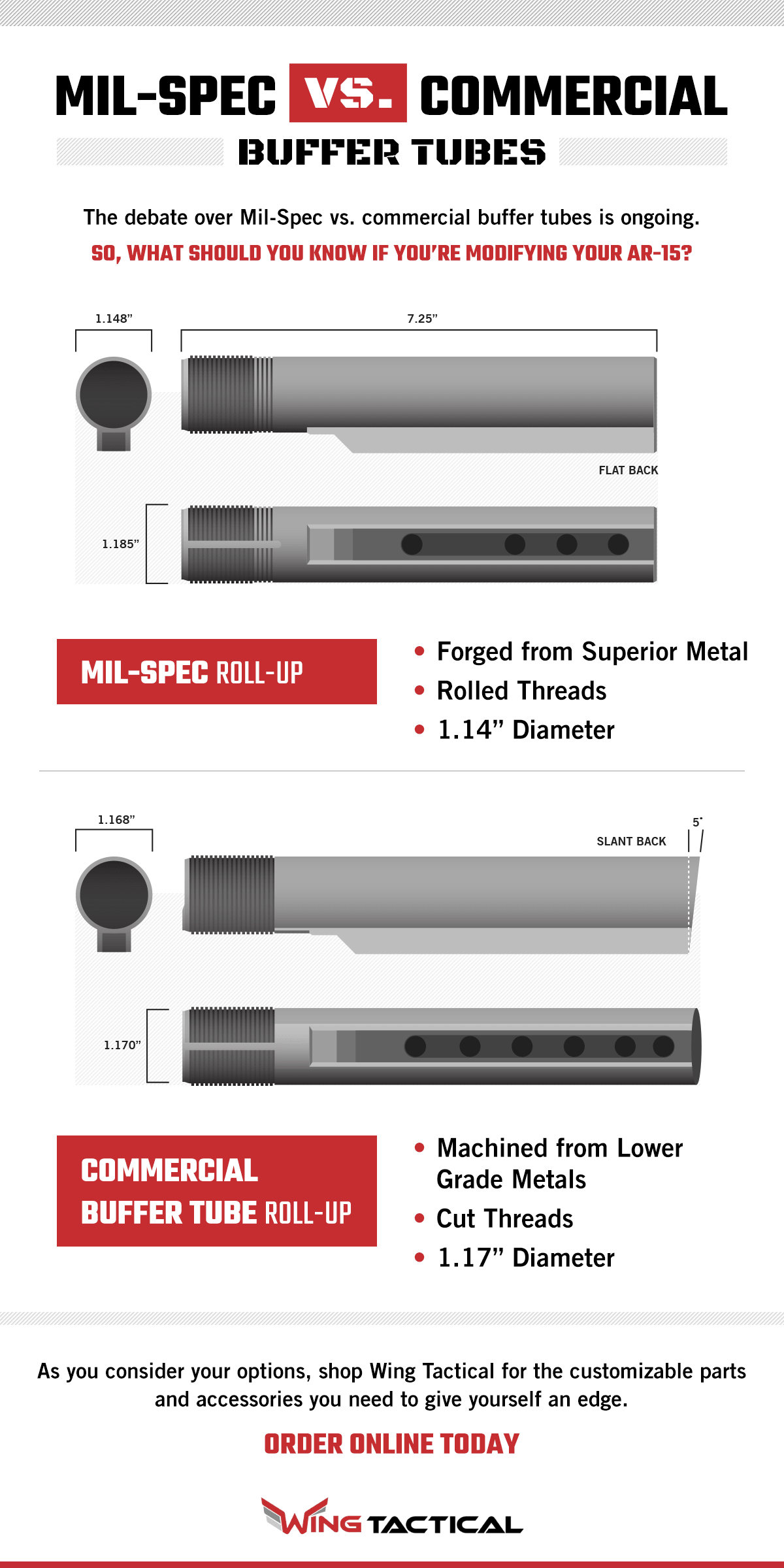 The Mil-Spec buffer tube will have a diameter of 1.14” while the commercial buffer tube will measure in at 1.17”. Even though there is only a small .03” difference between the two, this change has major implications regarding compatibility.

Another way to visually see if the receiver extension is commercial-spec or Mil-Spec is to look at the back of the buffer tube. Many of the commercial buffer tubes will have about a 5-degree slant to the back, while Mil-Spec will have a straight 90-degree flat back.

The specific differences between the two receiver extensions will be discussed next.

What is a Mil-Spec Buffer Tube

More expensive to produce and made with superior metal, Mil-Spec receiver extensions are forged from a single piece of 7075-T6 alloy aluminum. Because it is forged, the threads are rolled and created through a process of forcing or extruding the threads out. Rolled threads are superior to cut threads because they have more strength and durability.

Mil-Spec buffer tubes are considered standard in the industry. Most retailers, gunsmiths, and gun manufacturers make their parts and accessories to Mil-Spec standards because it makes them easier to sell to law enforcement and military agencies who almost always use Mil-Spec for their weapons. This is one of the reasons why Mil-Spec buffer tubes are more compatible across the spectrum of upgrades and options that are available.

What is a Commercial Buffer Tube

Commercial buffer tubes are created and designed to be less expensive. This is accomplished through using lower-grade aluminum, usually 6061. Unlike Mil-Spec, which is forged out of a single piece of aluminum, commercial receiver extensions are usually machined and made from multiple pieces of metal.

The threads on commercial buffer tubes are not rolled like Mil-Spec, instead, they are cut. This results in weaker threads because the cutting process will leave behind tiny tears, especially in the valley portion of the threads. With extended use, the metal will expand and can result in cracks over time. Mil-Spec threads are generally accepted to be more durable because the forged roll threading process does not leave behind these tears.

In order to make an informed decision whether commercial-spec or Mil-Spec is the right choice, there are four main questions that always need to be answered. Below are four of the most common questions.

Q: Which is More Common

A: Mil-Spec is used much more frequently than commercial. The main reason for this is that most retailers and manufacturers want law enforcement and Department of Defense agencies, who generally use Mil-Spec, to purchase their products. This results in many more upgrades and accessories that are designed to fit Mil-Spec, making it a more compatible choice.

Q: Can a Commercial Tube Work with a Mil-Spec Buttstock?

Q: Can a Mil-Spec Tube Work with a Commercial Buttstock?

A: Yes, however, this comes with some caveats. The commercial-spec is .03” larger than Mil-Spec, meaning that a commercial stock can be attached to a Mil-Spec buffer, however, it will not be a tight fit. For this reason, it is always recommended to match commercial buffer tubes with commercial buttstocks.

Q: Can Mil-Spec and Commercial Tubes Use The Same Inner Parts (BCG, Buffer, and Spring)?

A: Yes. The bolt carrier group, recoil buffer, and the action spring will all work with both Mil-Spec and commercial buffer tubes.