The AR platform has been tried and tested and is one of the most ergonomic and easy-to-use firearm platforms in the world. Though AR-15 is a very capable rifle, its caliber, the 5.56 NATO does leave more to be desired. It is an ideal caliber for self-defense, competition shooting, and many other applications. However, if you want to use your AR to hunt big games or do long-range shooting, you will need a bigger caliber, and the .308 is an excellent option. In fact, the predecessor and inspiration for the AR-15 was the AR-10, which was chambered in .308.

However, when it comes to building a .308 AR, there are many things that are different than building a simple AR-15. We are going to discuss some of the complications here and explain the things you have to consider when choosing an AR-10 or .308 AR upper.

Of course, every caliber is designed with its specific applications in mind, and both .308/7.62 NATO and .223/5.56 NATO are very capable calibers used by militaries all over the world. However, the .308 AR does have some advantages over an AR-15.

The .308 caliber has a much bigger projectile than 5.56, and because of the extra powder, it also has more energy. All of these things translate to better stopping power, which means that the .308 can incapacitate bigger targets with fewer shots. This is why a .308 AR would be much more effective for hunting deer and other big game than a 5.56 AR-15. Moreover, in a self-defense situation, you can be certain that a single shot from a .308 AR would stop an intruder.

Since the bullet is heavier, it isn't affected by wind as much as a 5.56 projectile. This translates to better ballistics and better accuracy.

Since the .308 caliber has a better trajectory and has almost double the kinetic energy than a 5.56 bullet, it also has a better range. This makes a .308 AR ideal for long-distance target shooting. In fact, the military also uses some .308 ARs as DMRs in a support role with sniper teams. The use of the Knight's Armament SR-25, which is designated as the SASS (Semi-Automatic Sniper System) M110 by the military 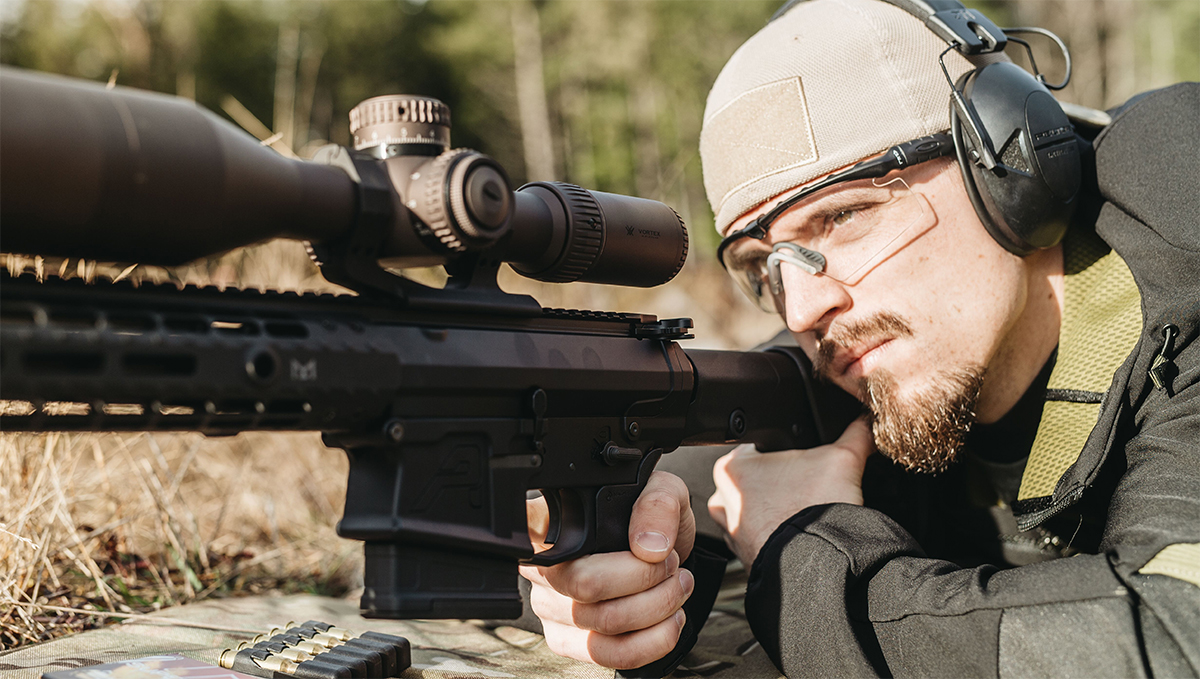 Unlike AR-15s, which were adopted by the military, and therefore have a standard that all manufacturers follow, the AR-10 wasn't adopted, and therefore, does not have any single military standard. This is why different manufacturers made their own modifications to the design, which has led to multiple different styles of .308 ARs. However, two of the most popular styles are the Armalite and the DPMS styles.

The AR-10 style rifles have been around for a very long time. In fact, before the AR-15 was developed, Armalite developed the AR-10, which was chambered in 7.62x51 NATO, which was the most popular military caliber of the time. However, since the military was moving to a smaller caliber, i.e., 5.56 NATO, the AR-10 did not see as much light. They were sold in small numbers to some countries, but in general, very few of them were made.

These days, manufacturers like Knights Armament make Armalite pattern .308 ARs. They are good rifles and visually very similar to any other .308 AR in the market, but there are several differences. Moreover, the aftermarket support for AR-10 is not that great, and their parts can be challenging to find. This is why they aren't the best option for a build.

DPMS panther arms also developed a standard for AR-10 rifles, and they named their rifle the LR-308. This DPMS style caught on in the market much more than the Armalite pattern, and most AR-10s or .308 ARs you will see at the range, or in your local shooting store are DPMS pattern rifles.

You can also easily find compatible parts for this model at virtually any halfway decent sporting goods store in the US. In addition, these rifles are usually more affordable than Armalite style rifles, allowing you to use high-performance parts for your build.

Whichever style you choose, make sure to buy the same lower and magazines because, like most important parts in the rifles, they also have different dimensions and aren't interchangeable.

The barrel length on .308 ARs can be different depending on the model and the shooter's preferences. Generally, barrel lengths are somewhere between 16 and 24 inches. Shorter 16-inch barrels are better for transportation, resulting in a much lighter firearm. If you intend to use your 308 AR for home defense or simply shooting at the range, a shorter barrel may be good, since it will make the rifle easier to wield, maneuver, and transport. On the other hand, if you want to get the most out of the .308 caliber and do some long-range shooting from a stationary position, the longer the barrel the better. However, any longer than 24 inches could have a negative impact on your ballistics rather than improving them.

Rifle barrels are usually made from different types of hardened steel, especially for more concussive calibers like .308. In general, there are two materials used for .308 AR barrels in the market.

Chrome Moly Vanadium steel is used to make military spec M4 barrels. CMV steel is the same as 4150 stainless steel, but it also contains some additional aliments that make it an alloy. Most significantly, it contains Vanadium, which can significantly increase the strength of a barrel, without adding much to its weight. It also increases the high-temperature stability of the steel, allowing the barrel to be more durable, and accurate for a longer time. The chromium in CMV barrels makes them corrosion resistant as well.

416R Stainless Steel usually has better accuracy, which is ideal for long-distance shooting. One downside of stainless steel barrels is you cannot beat them up. Excessive heat can change the metallurgy and warp the barrel and make it less accurate over time, but if you don't do mag dump with it, it should last up to 15,000-20,000 rounds. Also, if you are nice to it, you will get better groupings with cleaning and use. You should easily get SUB-MOA at 200 yards with some breaking in of your barrel.

If you are looking for a caliber instead of .308, that 6.5 Creedmoor is an excellent option. The ballistics of both calibers are quite similar, and both hold a comparable trajectory up to 300 yards. However, after that, 6.5 Creedmoor remains flatter and has less bullet-drop. Moreover, though .308 does have an advantage in terms of stopping power after 500 yards, 6.5 Creedmoor retains more energy, which is why at long range, the stopping power is also quite comparable. In general, the 6.5 Creedmoor fires a smaller projectile and has a better ballistic coefficient.

So, a .308 AR can have a lot of advantages, and after reading this post, we hope that you know what to look for when looking for parts for your next .308 AR build.