Build Your Own Lower Receiver

The time has come. You’re ready to build a lower receiver for your own AR-15. Whether you consider rebuilding your lower a necessary evil, or you’ve got the gun bug bad and you’re doing a full build from the ground up, you’re about to embark on one of those adventures that the faint of heart avoid at all costs. You’re going to need a lot of things, including some time and patience. When the process is all over, you’ll have more respect for and a greater understanding of your rifle than ever before.

If you really want this to work, and you’d like to keep your sanity too, plan ahead, procure the right parts, and a few tools before you start. If you have patience and work carefully, you’ll survive and come out with a functioning lower receiver. Heck, you might even enjoy the process.

Obviously, there are a lot of parts in a complete AR-15 Lower Receiver. Some of your parts list is going to be pretty obvious. You need a stripped lower receiver body, a buffer tube, a buffer, buffer spring, pistol grip and a stock. Then there’s a list of smaller parts: castle nut, end plate, bolt catch, magazine catch. The list gets more extensive the smaller the parts get. This is where AR build kits come in handy.

Fortunately for us, someone decided that it would be advisable to offer groups of related parts in AR build kits to streamline the process of selecting and ordering parts. Instead of ordering your buffer, tube, and spring separately, you can order an AR parts kit to complete your buffer assembly, some even include your castle nut.

The larger parts you’ve chosen will affect your needs in other parts. If you’re in doubt about a compatibility issue, take the time to check it out. If need be, contact the customer service team at Wing Tactical for help. They know their stuff and will do their best to keep you on the straight and narrow. If you had something in mind that isn’t going to work out as planned, they can give you suggestions and help you choose your AR build kits from Wing’s extensive catalog of quality, high-value parts.

It’s pretty much a given that you’re going to want to use an AR lower parts kit. However, every lower parts kit is not identical. You might have a preference in trigger or pistol grip and want to buy a kit that leaves them out so you aren’t left looking at extra unwanted parts that you paid for but will never use. That’s a decision you’ll have to make, but rest assured, you can get an AR LPK without a fire control group or an AR Lower Receiver Parts Kit less the trigger and pistol grip if that floats your boat.

It can be easy to get put off by the sheer number of small parts in your lower receiver parts kit. Luckily for us, the manufacturers are making it easier on us all the time, some even package subgroups or mini kits within their AR LPK to make it even easier to get it all together. In the average lower parts kit, you’ll find: 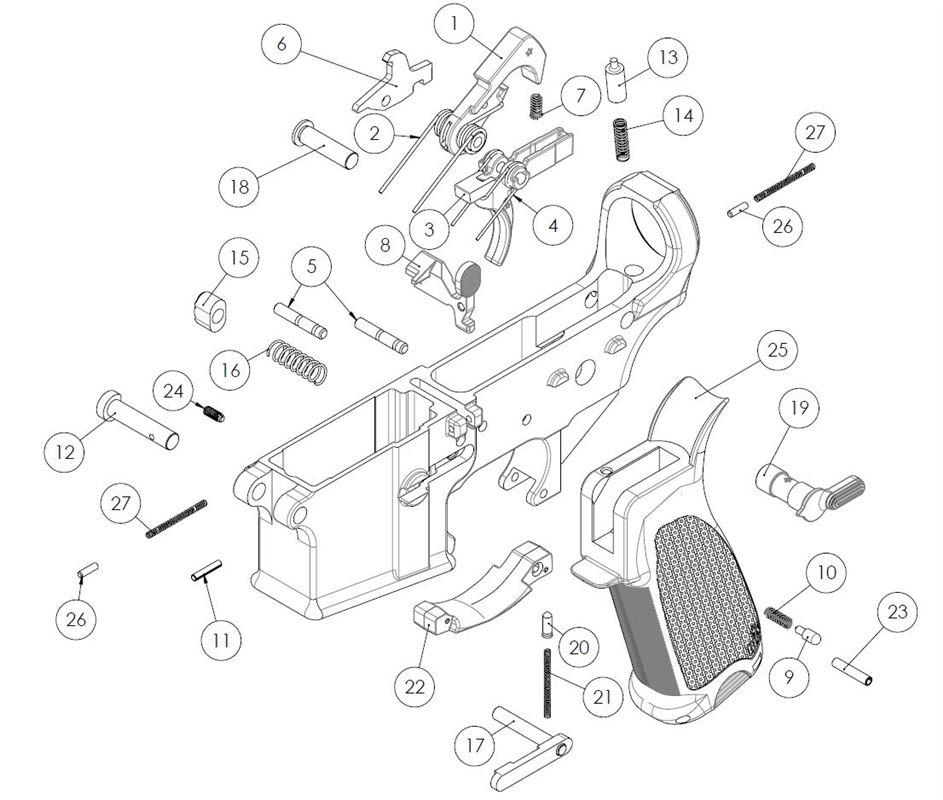 There are a few tools that are necessary to make that box of parts into a working lower receiver. In addition to the basics, there are others that make the build easier, save wear and tear on your lower receiver body and your fingers.

The Upgraded Tool Kit (add these to the above list to make life more bearable):

If we’re reaching for the stars, it would be really nice to have a rubber mat to work on at your bench. The best ones will have an exploded view of the AR and each part labeled.

Try to keep your work area as organized as possible and keep distractions to a minimum. I’d advise you to lock kids and the cat out before you start. With the wrong sort of help, you’ll find your vocabulary expands amazingly when all of your carefully sorted detents and springs are scattered across your workbench and floor. It's also a great idea to keep your sleeves rolled up, dragging a sleeve across a bench full of roundish parts also brings on a change in most people that aren't favorable. This is your first time out on the open road, give it a little extra attention. You can drive one handed and eat a cheeseburger next time.

You have your AR LPK, buffer assembly parts, stock and lower receiver body, your tools and a little time. You’re ready to start your lower receiver build. Should you have to go without a tool from the “Upgraded Tool Kit” your procedure will vary a bit from the steps here. If you’re in doubt about how to proceed, err on the side of caution and get help from an experienced armorer. 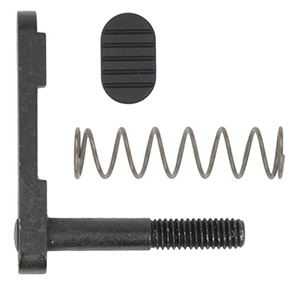 Place your vise block solidly in your bench vise and place the lower receiver body on the block. You’ll need your magazine catch, magazine release button, and magazine catch spring on hand for this portion of the assembly.

After a few turns, it will get harder to turn the button. At this point, you can use that handy pencil’s eraser to press against the button while you turn the magazine catch clockwise until you feel the end of the catch shaft touch the pencil eraser. Be careful to avoid scratching your receiver during this step. After installation, you should try an empty magazine in the mag well of your receiver and test the catch as well as the release function of the assembly. 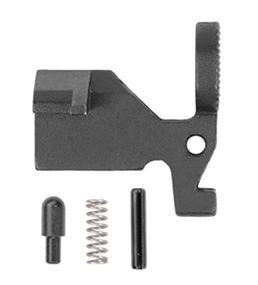 For this step, you’re going to need the bolt catch, bolt catch plunger, spring, roll pin, roll pin holder (if you have it) and roll pin punches. To begin, insert the little end of the bolt catch plunger into the spring and put them in the correct opening in the left side of the receiver. The spring should go in first, leaving the larger end of the plunger toward the outside. The next step requires you to place the bolt catch between the receiver tabs with the paddle on top. Once the bolt catch is placed over the buffer secure it by pushing a 3/32” roll pin punch through the forward tab and catch and through the rear tab. With everything in place, you’ll drive the bolt catch roll pin home. You’ll remove the punch that you’re using to keep things lined up slowly as the pin is driven in. Once the pin is in place you’ll want to check for proper movement. If everything is okay, you’re ready to place your pivot pin. 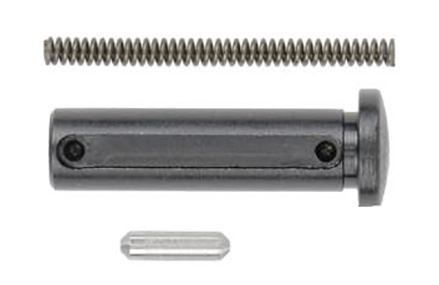 I know you’ve been wondering what the razor blade was for since I mentioned it the first time. Well, here it is, you need your razor blade or box cutter along with a pair of needle nose pliers to place your pivot pin and pivot pin detent. Insert the pivot detent spring in the hole at the front of your AR lower receiver. Use the needle nose pliers to place the detent down on the spring. Don’t let up, but slide your blade into place over the detent. Keep a little pressure on that detent with the blade while you slide the pivot pin in. It should clear the blade nicely and engage the detent. Try to slide it out. If it won’t slide back out of the receiver you’re ready to install your trigger. 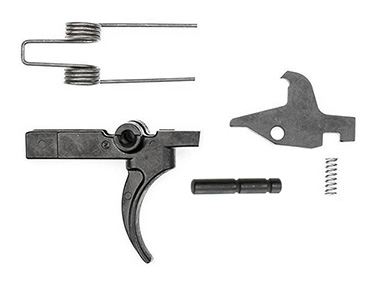 This is the moment we’ve all been waiting for, and some of us have been dreading. It’s time to install your trigger. For this step, you need your trigger, trigger spring, trigger pin, disconnector and disconnector spring along with the 5/32” roll pin punch. Take a breath, don’t panic, this isn’t much harder than the previous steps, there’s just a bit more hardware.

Begin by putting your receiver back on the vise block where you started out. Install your trigger spring by slipping one side of the spring over each of the raised shoulders of the trigger. When you put the trigger into the receiver the spring legs will be turned underneath and face the front of the receiver.

Once your trigger group assembly is complete you should test it, making sure there is fairly strong tension on the spring and that the disconnector is moving properly along with the trigger. 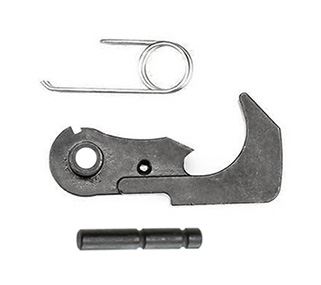 Installing the hammer in your AR Lower receiver will require the hammer, hammer spring, hammer pin and your friend the 5/32” punch.

The hammer simply drops into place with a leg of the hammer spring placed into either notch on the trigger retaining pin. You’ll recognize the tension on the spring when you push down to line up the hole in the hammer with the corresponding holes in the receiver body. If there is no resistance, you’ll need to make sure that you reinstall the hammer spring correctly before proceeding.

With steady downward pressure on the hammer, apply the roll pin punch to the hammer and receiver to keep the parts aligned in the same manner that you used it when you assembled the trigger. Since everything is held in place, inserting the hammer retaining pin will be straightforward operation just as the trigger pin installation was. This pin may require a little extra encouragement to find home because the spring is under a bit more tension. Use a small brass hammer to tap the pin in place while keeping things in line, but carefully allow the pin to move into place. 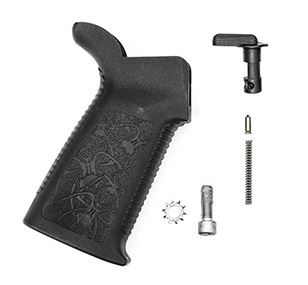 For our purposes, this will be the last step in assembling your AR-15 Lower Receiver. To complete this step you’ll need your end plate, castle nut, takedown pin, the takedown pin spring, and the takedown pin detent, your buffer extension, buffer retainer, retainer spring, buffer spring and a flathead screwdriver. You’ll also want your trusty blade to help with detent installation. Most lower receiver parts kit doesn’t come with the buffer tube assembly. But don’t worry, at Wing Tactical, we offer a vast selection high-quality buffer tubes and associated accessories to complete your build.

Turn your castle nut all the way onto your buffer tube with the notches that give it its name leading onto the tube. Align the end plate with the tube and place it far enough onto the tube to give your room to work. Be sure your end plate is facing the correct direction. Begin screwing the buffer tube into the receiver body. Place the buffer retainer spring and buffer retainer in the hole in the threaded portion of the receiver. Now you may continue to screw in the buffer tube until it barely touches the retainer. You will need to push the retainer in (You can use the pencil here if you like.)

As you return to the back side of your receiver, you will press the end plate forward against the detent spring at the rear of the receiver. You may want to facilitate this by using your blade to hold the spring in place until you have your end plate fairly close to stable so that you don’t damage that detent spring. Now tighten the castle nut to the receiver by hand by continuing to turn it clockwise. You will want to follow up with an armorer’s tool or specialty castle nut wrench to be sure the castle nut is properly tightened. Many builders also choose to stake the castle nut into place for added security. Now you can insert your buffer and buffer spring into the tube. You’ll want to make sure your takedown pin can be used as intended. This completes your lower receiver build. You’ll need to add a stock of your choice, but many armorers prefer to do this as the final step of a completed build.