The AR-15 is a true marvel of engineering. From its sleek, formidable profile to its light recoil, it is one of the most customizable and versatile guns on the market. Its smooth operation depends on an intricate series of actions taking place one after another.

The rearmost component in this series is the buffer tube assembly, and like the other parts of the AR-15, it makes a huge difference in performance. The buffer and buffer tube are part of the cyclic action of the rifle, and adjustments and replacements allow users to significantly fine-tune the feel of their rifles.

We will begin by explaining what a buffer tube is, including what its various parts do. We will then describe the difference in military-spec versus commercial AR-15 buffer tubes. We'll look at the different buffer tube lengths — specifically, rifle, carbine, and pistol. Finally, you'll get to know the high-quality buffer tube manufacturers we offer.

What Is a Buffer Tube?

The buffer tube is part of the lower receiver of an AR. This system attaches to the back of the weapon and gives a point at which to attach the buttstock. It also contains the recoil buffer mechanism, which is partly responsible for loading the next round.

This component is home to the buffer and buffer spring, also known as the action spring, which is what causes the bolt to slide when the gun is cocked. The buffer itself provides a point of contact for the bolt carrier to move backward through the buffer tube, while the spring rests in the rearmost part of the buffer. This spring is compressed and then recoils, launching both buffer and bolt carrier toward the front of the gun. This action closes the bolt and chambers the next bullet.

Because the recoil buffer moves backward during firing, its weight is responsible for counteracting some of the gun's recoil. This means buffers of different weights will affect the gun's recoil and cycling significantly.

The Parts Within a Buffer Tube Assembly

If you are looking to build your own AR-15 or upgrade the stock buffer tube on your AR-15, you will need to have a keen understanding of the difference in mil-spec and stock AR-15 models. These two components follow different standards and will deliver different results.

What is the practical difference, if all that varies is a nearly microscopic difference in size? The answer is that buttstocks, which are also machined to tight tolerances, will not fit over the wrong-sized buffer tube. In this case, a buttstock meant for the commercial AR-15 would be loose on the Mil-Spec tube.

The buffer tubes that come in some AR-15s are 1.163 to 1.173 inches in diameter, which makes them ever so slightly larger than Mil-Spec buffer tubes. As a result, their surface is actually a bit thicker than mil-spec. The back of a commercial buffer tube is also more likely to be slanted, whereas Mil-Spec will typically be flat.

Again, the most important difference here is size. It is critical to choose your buffer tube and buttstock in the same size, or else the buttstock will not slide over the buffer tube correctly. Most importantly, never try to force a mil-spec buttstock over a commercial buffer tube.

An interesting note is that Mil-Spec buffer tubes were the original design. This commercial model came about due to its more economical manufacturing process — in other words, the ability to make the part for less money. Manufacturers added a slight bit of diameter to the tube itself, which allows them to cut the threads in instead of rolling them in.

Which Should You Choose?

To be perfectly frank, there is not a lot of scientific evidence pointing to one or the other. However, Mil-Spec tubes, despite their higher cost to make, allow more flexibility for those considering aftermarket upgrades to buttstocks. This may be enough of a reason to go with a Mil-Spec buffer tube over a commercial one. 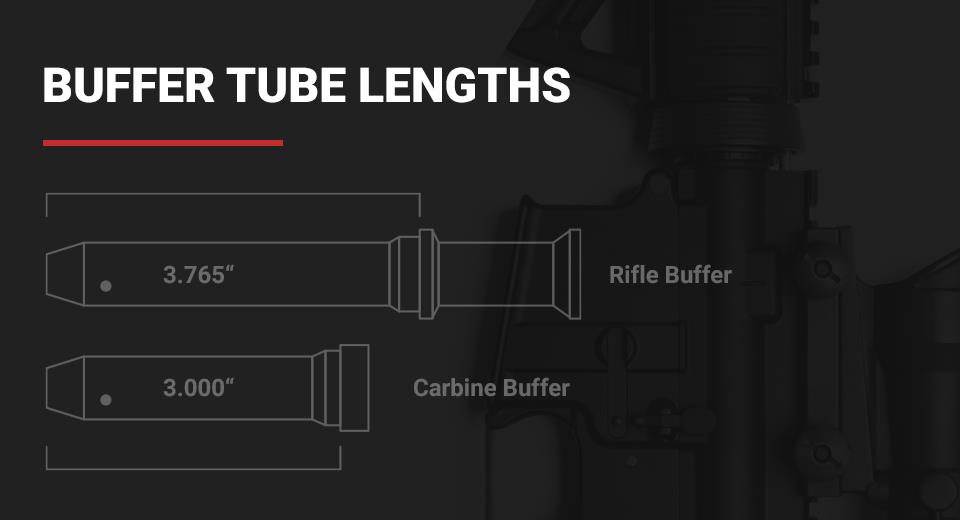 Buffer tubes and their corresponding springs come in different lengths: rifle, carbine and pistol. These open up more degrees of customizability, though they will correspond with overarching features of the whole gun and will have a big impact on the type of build you can achieve.

Before you select your buffer length, be aware there are federally mandated restrictions on what type of barrel is compatible with certain types of buffer tubes. Read more about this below.

The most basic form of buffer tube is the rifle buffer tube, and this type is especially simple when compared with carbine or pistol tubes. Rifle tubes are quite a bit longer the others, and they do not possess a notch to accommodate an end plate. This is because such end plates are not used in fixed stocks sized for AR rifles.

Despite its different design, a rifle-length buffer tube will still hold the takedown pin and spring in place once it is threaded into the receiver.

Carbine buffer tubes are significantly shorter than rifle assemblies. They typically have a rib on their exterior to help align the stock over them. Springs for carbine buffers are also shorter and have fewer coils than rifle buffers.

Pistol buffer tubes are not designed to accept stocks made for rifle buffer tubes, but you can generally install arm braces on them. The arm brace is a stabilizer that, instead of allowing the user to brace the rifle against their shoulder, secures its butt onto their forearm. This gives better side-to-side stability and also distributes the force of recoil into the user's arm instead of just their hand. This is all part of the conversion of the AR-15 into a "pistol."

At Wing Tactical, we offer the industry's best buffer tubes in a variety of sizes and styles. Here are some of the manufacturers we work with:

2A Armament takes an extraordinary level of pride in their products, right down to hand-finishing everything they make. This results in an unparalleled level of personal care and attention that harkens back to the old days of gunmanship — owning a piece of gear that is as beautiful to look at as it is to use.

This company caters to making AR receivers, which is a job where it excels. Additionally, it crafts products like ultralight scope mounts, barrels, bolt carrier groups and M4E1 enhanced upper receivers. Wing Tactical carries the following products by Aero Precision.

With over 40 years of experience machining of the best AR-15s in the world, the founder of this company started with the vision of creating top-quality, affordable components and guns. The care and professionalism that have been defining aspects of the company are visible in their AR-15 products. Wing Tactical sells the following LUTH-AR buffer tube assembly.

Wing Tactical is your best ally if you want to give yourself an edge. We sell all-new, high-quality products that can take your shooting experience from amateur to professional. There is a reason guns are such a passion for so many people: Guns are as customizable as we are unique. You have the opportunity to tune your gun to perfection with the right parts and know-how. Buffers and buffer tubes are a key piece of the AR-15's operation and have a huge impact on recoil, stability, and cycling. To take the next step and upgrade your gun dramatically, visit our website to peruse the products we have available.