Picatinny vs. M-LOK vs. KeyMod

Picatinny vs. KeyMod vs. M-Lok: Which one to choose is a dilemma that many gun owners face when considering a  rail system for their AR-15 or another type of weapon. For most AR-15 owners, the decision comes down to personal preference and how they feel about a variety of factors such as the performance and look of the piece. Of course, cost will also have an impact on the selection of a rail system. 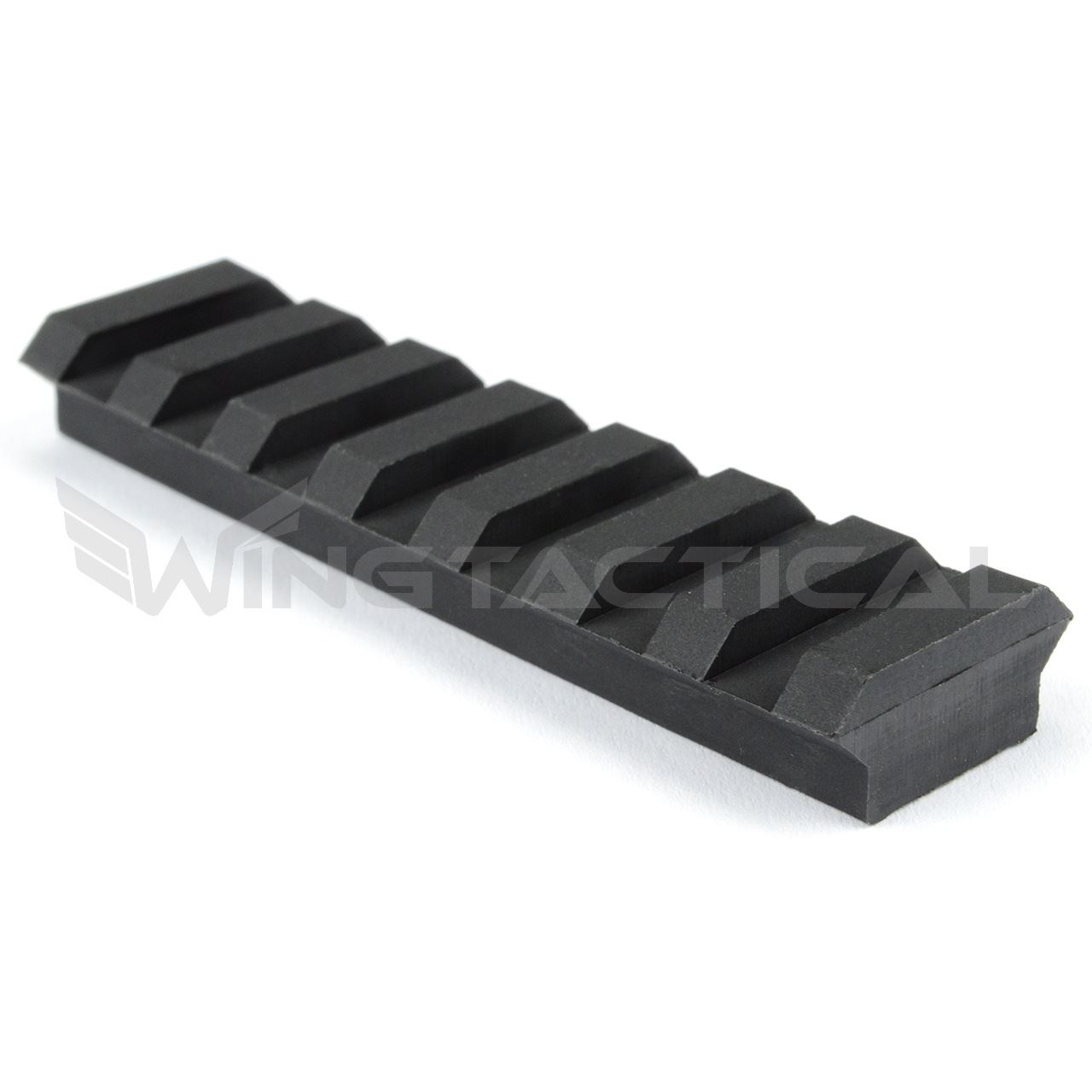 For many years, the Picatinny has been regarded as the standard mounting platform for AR-15s and other rifles. Originally developed in the 1980s and named for the Picatinny Arsenal in New Jersey, the Picatinny is essentially an enhanced version of the Weaver mount first introduced by the W.R. Weaver Co. in the 1930s. The most noticeable difference between the two is that the Picatinny platform has a more distinct angular design in comparison to the Weaver’s lower, wider dovetail construction. The Picatinny rail also features a wider locking slot width and more consistent spacing between the slot centers.

The Picatinny originally served the purpose of enabling the mounting of scopes onto the receivers of larger caliber rifles. Over the years, the functionality of the Picatinny has been enhanced to include the mounting of accessories such as foregrips, night vision devices, tactical lights and many others. The use of Picatinny rail systems has become so commonplace that the design of many firearms has been modified to accommodate them as a replacement for iron sights. 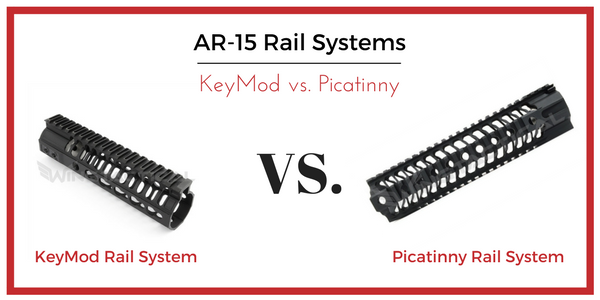 While the Picatinny was — and still is — widely regarded as an excellent accessory rail system, some gun users do not want the extra weight that the Picatinny adds to the forend. One remedy for this issue is to use low-profile handguards that enable the attachment of smaller sections of rail precisely where they are needed. A more acceptable alternative for many gun owners that does not require any type of Picatinny adapter is the use of an alternative rail system such as the KeyMod.

Released in 2012 through a partnership between VLTOR Weapon Systems of Tucson, AZ and Noveske Rifleworks of Grant Pass, OR, the KeyMod derives its name from the keyhole profile of the system’s mounting slots and the modular design concept. KeyMod is an open-source, public domain design, which means that any manufacturer can use the system to produce accessories without providing compensation to the original developers.

KeyMod enables the direct attachment of accessories such as laser mounts, sights and vertical grips without the need for any type of adapter. Attachment of KeyMod accessories is a relatively simple process of lining up the lugs on the part with the round portion of keyholes on the rail, then sliding the newly attached accessory forward and tightening the screws.

But perhaps the most important factor for many gun owners when deciding between KeyMod or Picatinny system is the difference in weight. Because no additional adapter is required, a KeyMod system is significantly lighter than its Picatinny counterpart, which makes the weapon easier to handle, control and transport. Most importantly, the KeyMod system does not have the sharp edges like the Picatinny quad rails. Therefore, it is much more comfortable to handle and manipulate when holding without gloves.

M-Lok As an Alternative to the KeyMod Rail System 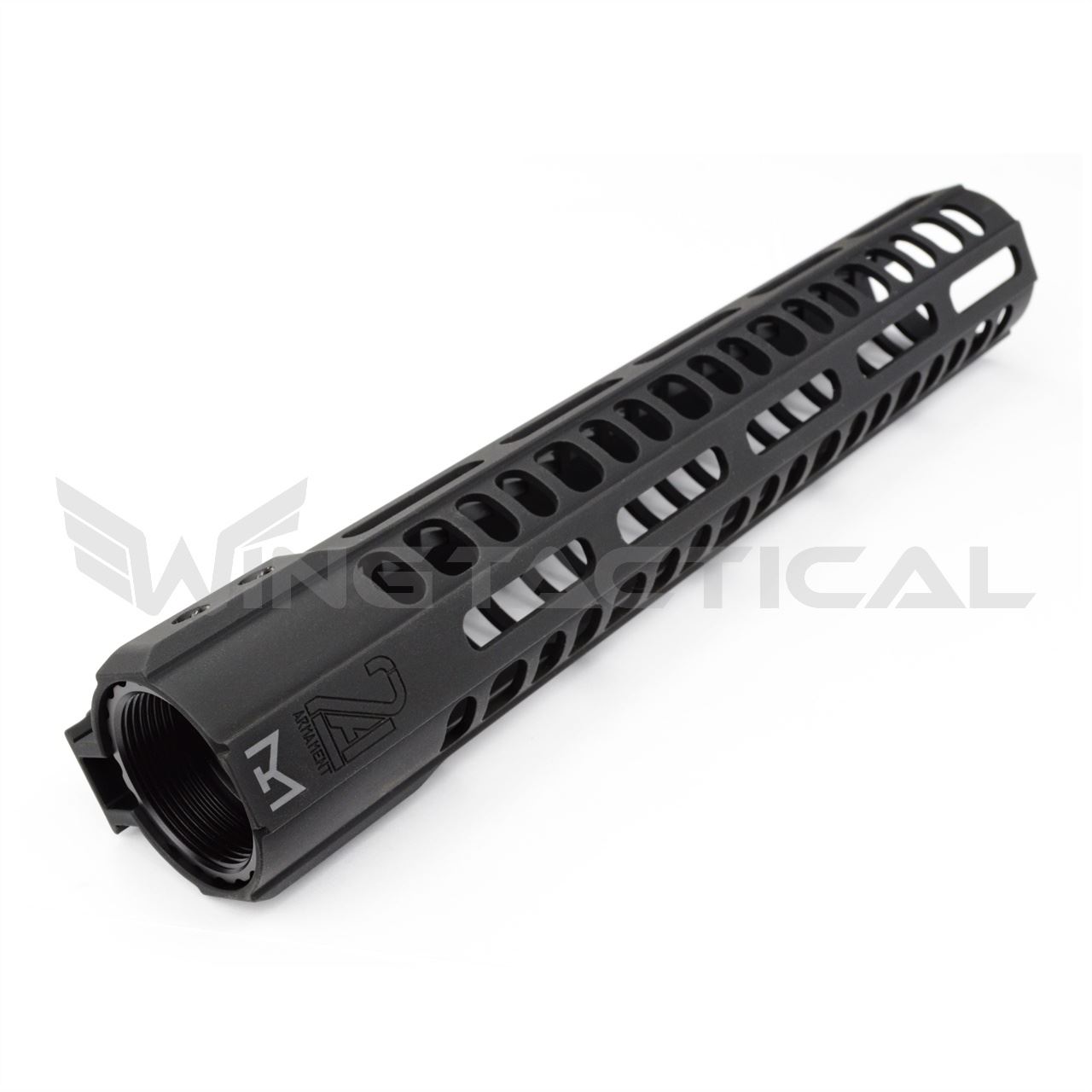 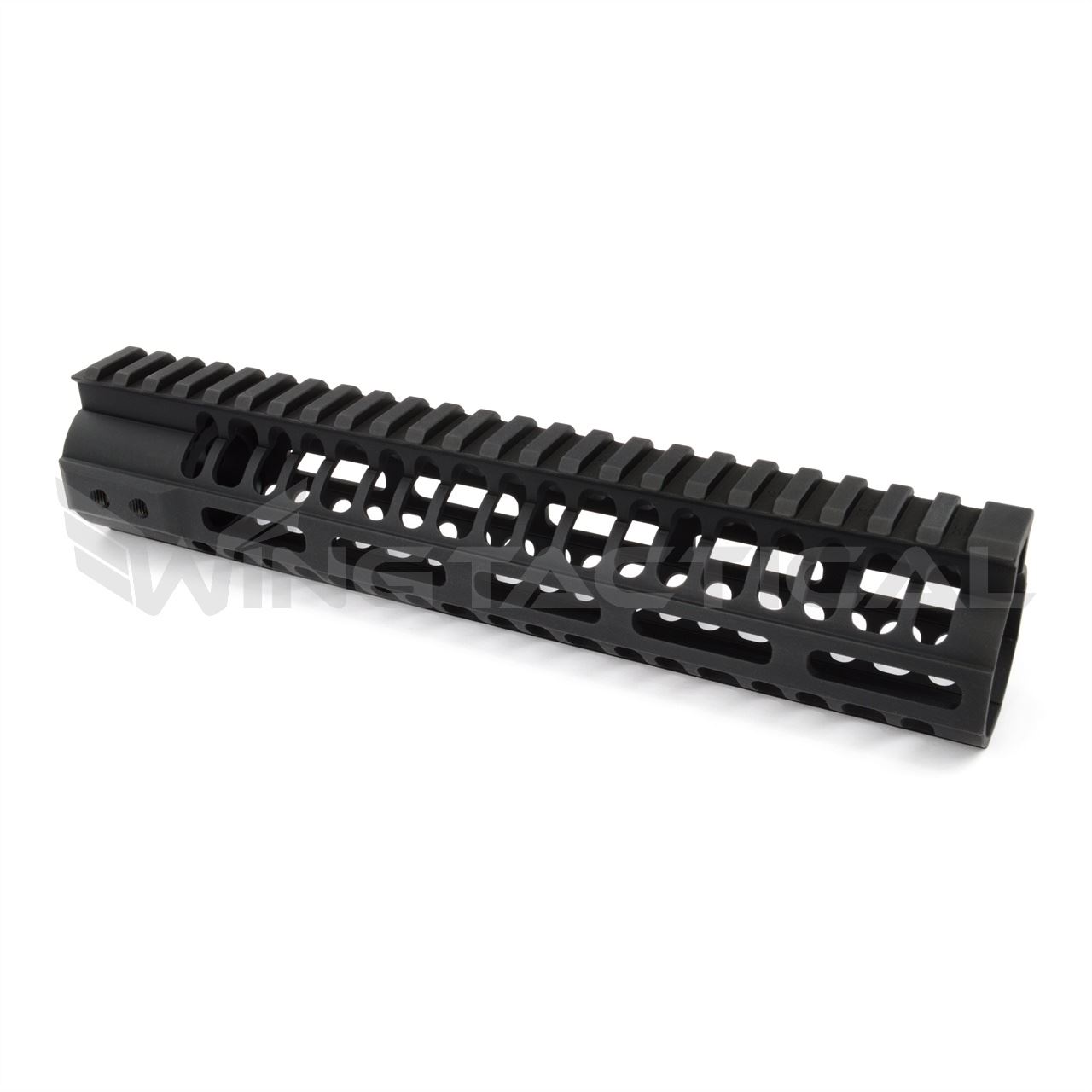 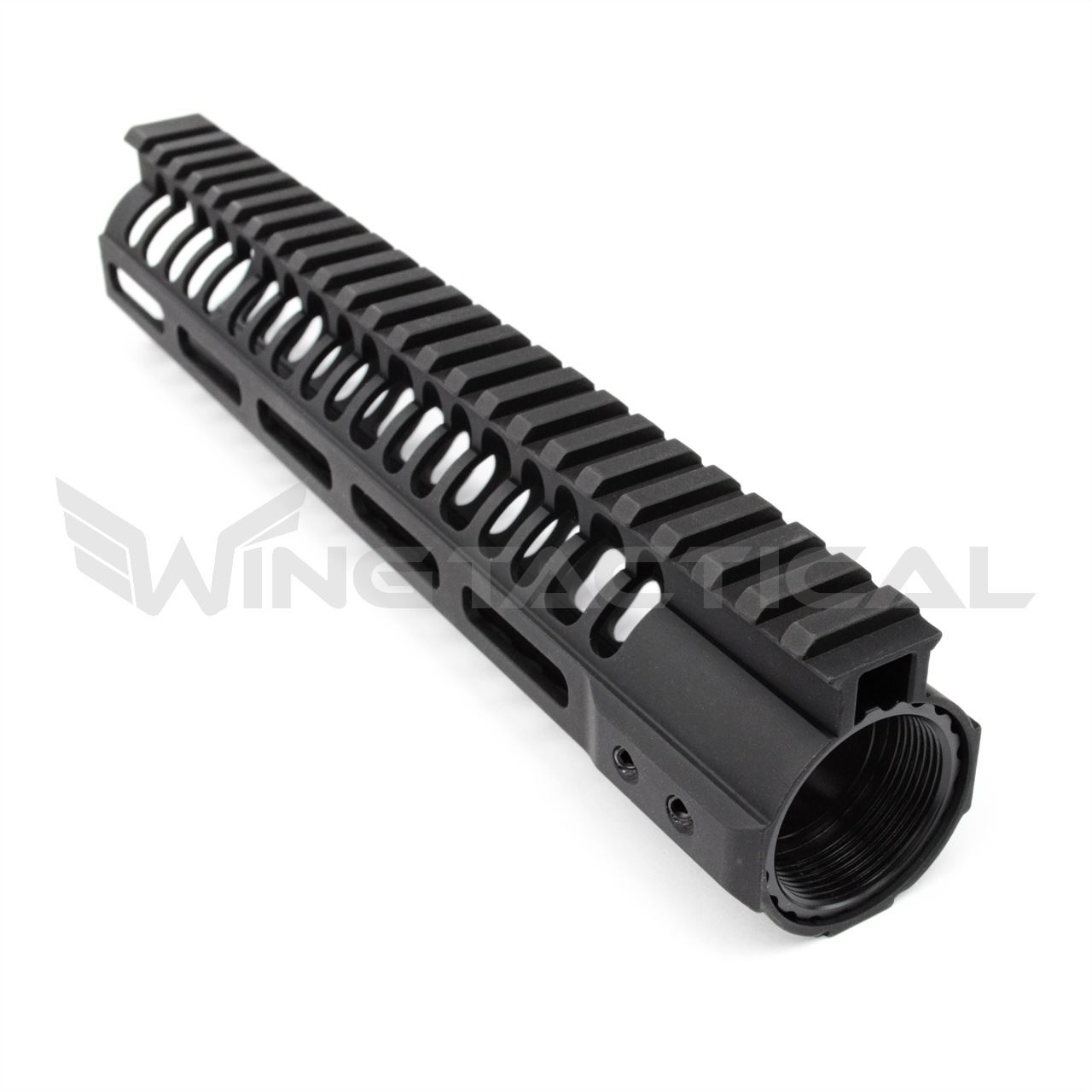 In 2014, Austin, TX-based Magpul Industries introduced a variation of the KeyMod system. Known as M-Lok, this rail system has been designed to work more effectively with polymer attachments. Instead of the KeyMod’s keyholes, the M-Lok system features a series of slots. All M-Lok-compatible accessories are equipped with t-shaped, bi-directional attachment lugs enabling placement on either the front or rear of the slots. As with KeyMod, the M-Lok system is also an open-source product.

KeyMod vs. M-Lok: Which Is Better? 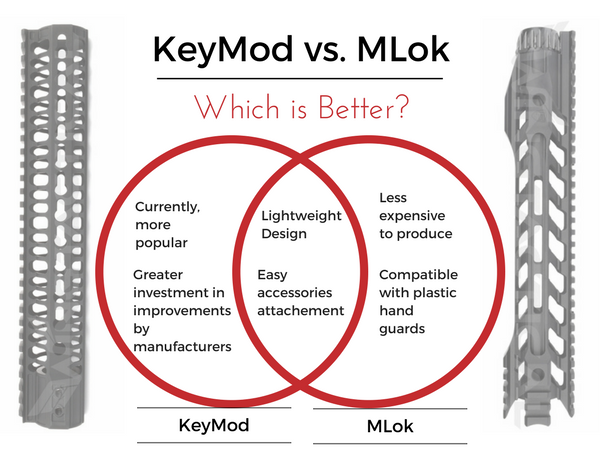 For gun owners who view both KeyMod and M-Lok technology as an upgrade over the Picatinny rail system, it all boils down to which of the two newcomers they prefer. Both have many similarities, most notably the lightweight design and construction and the easy attachment of accessories.

Right now, the jury is still out as to whether KeyMod or M-Lok is the better rail system. Both rail systems are still relatively new, and it is difficult to determine whether one will move to the forefront. Some firearms industry experts believe that the battle will come down to popularity and cost as opposed to which system is technically superior. In fact, it is still unclear as to which technology is better, and it is unlikely that the typical gun user will place enough of a demand on the system to notice any discernible difference.

Magpul claims that the M-Lok system is less expensive and easier to produce. One important M-Lok advantage is its compatibility with plastic hand guards that makes it more amenable to the mass production of a wider range of firearms products. Furthermore, Magpul is naturally more willing and able to produce accessories that will work with its M-Lok system.

While this might make it seem that the Magpul product is gaining the upper hand in the KeyMod vs. M-Lok debate, the former has the advantage of being the first on the scene. Because of KeyMod’s two-year head start, many leading firearms manufacturers have already made a substantial investment in the form of time and resources in the KeyMod technology. For most of these manufacturers, changing horses in mid-stream would not be a prudent move from a business standpoint, at least for the foreseeable future. That could change if M-Lok continues to establish a strong foothold in the marketplace.

What About the Viability of Picatinny?

While it might seem that Picatinny is being pushed to the background in the Picatinny vs. KeyMod vs. M-Lok debate, Picatinny does have one important advantage over the other two: It works better for mounting optics and sights. As such, many firearms experts still regard Picatinny as the universal rail system standard.

As with just about any product in a free-market economy, the consumer will ultimately decide which rail systems will be the most viable in the long run.

View Our Selection of AR-15 Rails