As almost every firearm accident is caused by carelessness, proper gun safety procedures must be taken incredibly seriously. Basic firearm-safety rules are really just common sense, and it is of paramount importance to understand that firearm accidents don't happen with guns that people know aren't loaded but happen because people are careless with guns that they think aren't loaded or they are careless with a gun they know is loaded. Either way, virtually every firearm accident is avoidable by following some straightforward guidelines. 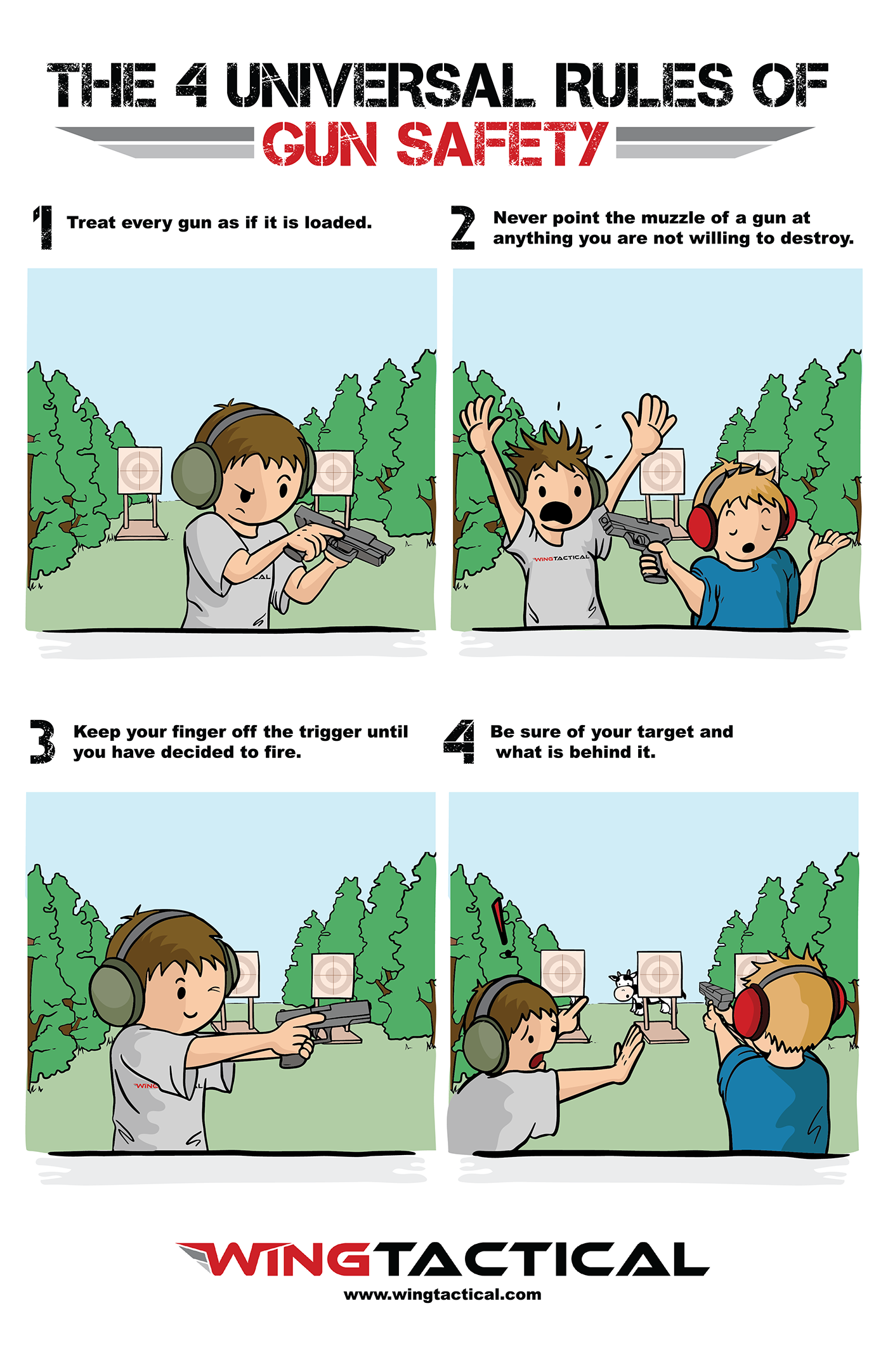 The Four Rules of Gun Safety

While there are longer lists of gun safety rules, the fundamental safety issues can be condensed into four universal gun safety rules that should be applied whenever you are handling a firearm:

1) Treat Every Gun As If It Is Loaded

Far too many preventable shooting accidents happen every year with guns that people think aren't loaded. The only way to prevent these types of accidents is to always assume that every gun is loaded until you have "cleared" the weapon. Clearing a weapon means to personally work the action and inspect the chamber yourself to confirm with your own eyes that the chamber is empty. Never, ever, just take someone's word that a gun is not loaded no matter how well you know them or how much you trust them. No exceptions, not ever. One common accident that should never happen is shooting and sometimes killing someone else by playing around with a handgun they thought wasn't loaded. These accidents are easily avoided by clearing the weapon yourself every time you pick up a gun. Always assume the gun is loaded if you have not cleared the weapon yourself. Always.

Bear in mind the bullet comes out of the muzzle, and it is that bullet the does the actual damage. Most people, even many hunters, do not truly understand the actual destructive power of a bullet. If more people truly understood this, it might help drive home how truly dangerous guns can be when mishandled and make them more conscious about where they are pointing the muzzle.

It is not just the hole the slug itself makes when striking tissue that does the damage. Often incorrectly called hydrostatic shock, a bullet creates massive hydrodynamic shock waves when it strikes anything that contains water. This is why a jug of water explodes when stuck with a bullet, but the same bullet only punches a small hole in a piece of wood. As the body is made up of over 50 percent water, the hydrodynamic shock waves created by a bullet cause the same devastating damage in living tissue.

Being careless with where you point the muzzle of your gun can change lives forever in an instant. This point is tragically emphasized by the account of a Montana hunter whose rifle malfunctioned and went off accidentally while he was unloading it. The bullet ripped through a horse trailer and killed his companion standing on the other side. This tragedy would have been avoided by simply keeping the rifle's muzzle pointed in a safe direction. While the ground or floor is usually a safe direction, you must also be conscious of objects that can cause the bullet to ricochet, such as large rocks or metal objects.

The term "trigger discipline" refers to the practice of keeping your finger off of the trigger until you are ready to actually fire the weapon. Exercising trigger discipline will prevent you from accidentally discharging your weapon before you have positively decided to do so. You may be in a situation where you have to draw and even point your weapon in a self-defense situation, but keeping your finger off the trigger will prevent you from accidentally discharging your weapon. The best solution is to keep your trigger finger across the outside of the trigger guard and not move your finger to the trigger until you are actually ready to fire.

4) Be Sure Of Your Target And What Is Behind It

Knowing what you are pointing your gun at and what is beyond the target are twin pillars of safe shooting. It is not just enough to be certain of your target, but understanding that a bullet has the potential of hitting unintended objects after it has exited the target. This is a critically important consideration when selecting a home-defense round, especially in populated urban areas. Here a high-powered round can rip right through walls, doors, and ceilings and hit someone on the street or in another residence. Knowing what lies behind your target is also an important consideration when hunting, as the bullet can pass through your intended target and wound or kill another animal standing behind your target.

Virtually all firearm accidents are the result of ignorance or carelessness and are entirely preventable if people would simply follow these four universal rules of gun safety. You must always remember that you are the one who is totally responsible for whatever happens anytime you are handling a firearm and assume the responsibility for the safety of yourself and others every time you pick up a gun.