Suppressors are often misunderstood. While pop culture tends to portray suppressors as accessories used in situations involving crime, suppressors are actually legal muzzle devices that can help shooters protect their hearing. Below, we debunk six of the most common myths about suppressors to help you make a more informed decision when choosing a muzzle device.

What Is a Suppressor?

A suppressor — sometimes referred to as a silencer — is a small cylindrical device that fits onto your gun's muzzle. It reduces sound intensity during discharge by decreasing gas pressure behind the bullet.

Using a suppressor can improve your shooting experience, but there are many myths about how they work and why they're used. Six myths we hear the most include:

A suppressor can reduce the volume of a gunshot, but it can't silence it. It works similarly to a car muffler, as the suppressor provides a controlled environment for gases to expand, reducing their volume. However, a suppressor does not affect the sound of the gun operating, which means there will always be some level of noise associated with a shot.

The sound of an average rifle shot is around 160 decibels, and a suppressor only reduces that noise by about 30 decibels. Keep in mind that the exact noise reduction you get also depends on the type of suppressor, ammunition and caliber you use.

2. You Don't Need Hearing Protection With a Suppressor

Even with a suppressor, gunshots are very loud. Suppressor noise reduction is like going from the noise level of a jet taking off to the volume at a typical rock concert. While using a suppressor may provide a "safer" hearing level, repeated, unprotected exposure to gunshots can still damage your hearing. If you're planning to shoot more than a few suppressed rounds, you'll want to use hearing protection.

Suppressors are highly regulated under the National Firearms Act (NFA), but they are legal on the federal level. On the state level, suppressors are currently legal in 42 states. When purchasing a suppressor, you must undergo a background check and pay a $200 tax stamp.

While many believe suppressors reduce a bullet's velocity, the opposite is true. A suppressor essentially extends barrel length, giving the cartridge's expanding gases more time to push the bullet before it leaves the muzzle. Although a suppressor doesn't create a significant velocity increase, it does have some effect on the bullet's point of impact compared to using a rifle without a suppressor.

A suppressor does not make direct contact with the bullet — it simply traps gases. As a result, a suppressor can't make your gun less accurate. For some shooters, the reduced noise from a suppressor helps them concentrate on trigger control and recoil management, resulting in more accurate shots.

6. Suppressors Have a Short Life Span

This myth has some basis in reality. A suppressor works by trapping the expanded gases in slots called baffles. Early versions of the suppressor used baffle materials that lacked durability, so these suppressors needed to be replaced after a certain number of shots.

Modern suppressors use high-strength metal baffles designed to last tens to hundreds of thousands of rounds without becoming worn. As long as you keep your suppressor in good condition, you'll get long-lasting performance.

Everyone at Wing Tactical is a firearm enthusiast, and we're here to help you make your AR-15 or other firearm as efficient as possible. We only sell devices we'd use on our own guns, so you can trust our recommendations.

Since suppressors are regulated at both the state and government levels, be sure to review all applicable laws before you start the ordering process. If you decide the extra paperwork and expense aren't for you, check out our selection of other muzzle devices, including cosmetic-only fake cans from Spike's Tactical. We can also hook you up with a new threaded barrel, a thread adapter or any other accessory to complement a suppressor on your firearm.

When you buy from us, you'll benefit from an outstanding customer service experience. We offer next-day shipping on all our orders and 30-day, hassle-free returns so you get what you need as soon as you need it.

Explore our online inventory or reach out to us today to learn more. 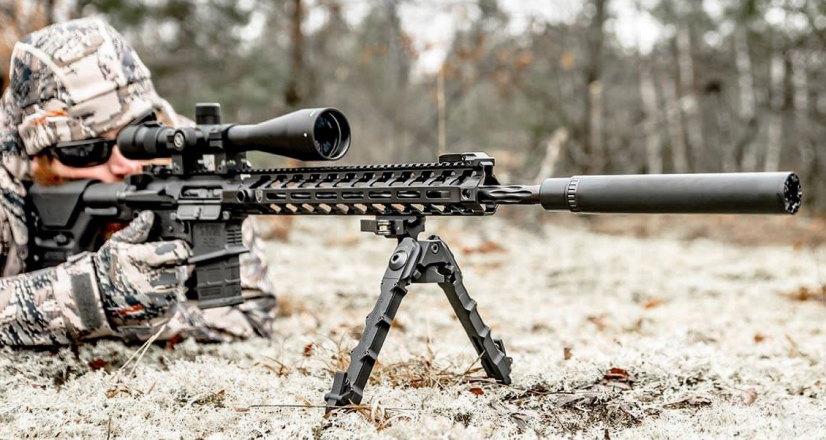