When you’re looking to step up to the next generation of competition bolt carrier groups for AR-15, Iron City Rifle Works has exactly what you’re looking for, and so much more than you’ll ever expect. The Iron City Rifle Works G3 Enhanced Competition Bolt Carrier Group is better than the competition with any coating, but prepare yourself, you’re going to have to make some tough choices.

Do You Want Outstanding Performance, Amazing Lubricity, or Workmanship That’s Second to None?

How about all three? If you choose an Iron City Competition Bolt Carrier Group, it doesn’t matter if you pick the novelty of a gold bolt carrier group for looks, or the amazing performance of the advanced physical vapor deposition (PVD) coating that is Iron city’s Eclipse, the ultimate slickness and durability of the BlackDiamond DLC bolt carrier group, or you reach for the C4V Gold (TiN) or Copperhead (TiCN) versions of the Iron City BCG, you’re going to have a life-changing experience the first time you take it out to the range. Any one of Iron City’s G3 Enhanced bolt carrier groups is going to put your old BCG to shame.

Each version of Iron City’s G3 Bolt Carrier Group is better than the last, and they’re all so much better than Mil-spec that you’ll think that cleaning components with traditional coatings is a hardship. Choose the TiN Bolt carrier group, the Copperhead or the sick black beauty that is the BlackDiamond DLC bolt carrier group. They all feature self-lubricity that makes them superior to Mil-spec coatings. They reduce wear on components, resist fouling and clean up beautifully. While each one has different inherent qualities, you can rest assured that whichever you choose will make you one happy shooter. And yeah, you can just pick the TiN bolt carrier group just because your wife likes the pretty gold bolt carrier group, we won't tell.

Choose any one of Iron City Rifle Works’ G3 BCGs from Wing Tactical and you’ll give yourself an edge. 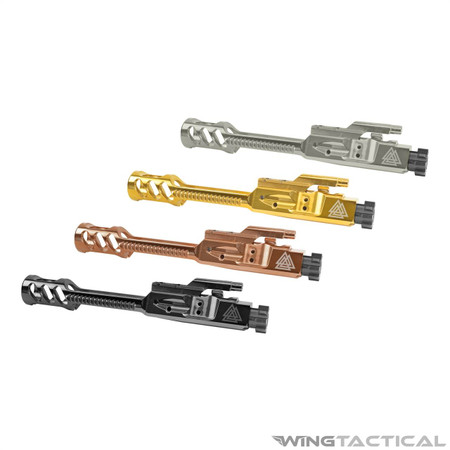