If you are looking for a high-quality lightweight receiver for your next AR-15 build, you should check out the Model 1 upper receiver and handguard set from Radian. This set includes a Radian Model 1 receiver and a 10-inch handguard.

The lightweight receiver is made from 7075-T6 aluminum and is structurally reinforced in critical areas near the chamber for improved strength and rigidity. The receiver features a lightweight minimalist forward assist and a port door to keep debris out of the receiver. You also get a Raptor-SD Ambidextrous Charging Handle with the set.

No Uncomfortable and Sharp Edges

The 10-inch aluminum handguard has a low-profile free float design; it is mounted on the receiver with steel cross bolts and has an anti-rotation pin to keep the handguard in place. The handguard has M-LOK slots at the 3, 6, and 9 o'clock positions and a continuous Picatinny top rail for mounting optics and other accessories. The M-LOK and lightning cuts on the handguard are precision machined and chamfered to eliminate sharp edges and make the handguard more comfortable to handle.

This upper receiver and handguard set are available in multiple finishes, including Cerakoted Black, Flat Dark Earth, or OD Green. 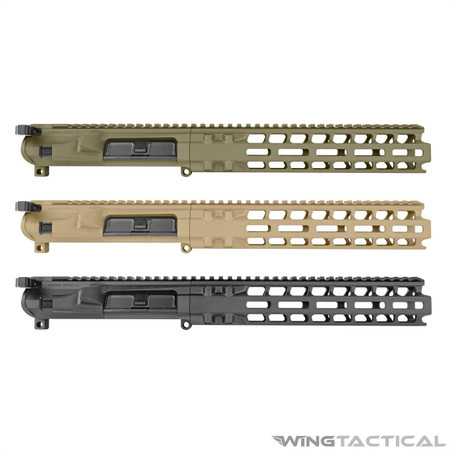