Have you ever wanted to put together your own AR-15 but are a bit leery of making just the right choices? I know, it can be a daunting task with the variety of parts out there. Piecing together parts is one thing, however, choosing components that work the way you expect them to is another thing altogether. Well, now you can put that project on the fast-track with an Aero Precision AR-15 upper with fluted barrel.

If you're a fan of versatility then an AR-15 fluted barrel upper chambered for .223 Wylde is just the ticket for you. This barrel can safely chamber the .223 as well as the 5.56 NATO round. Consequently, you benefit in the way of accuracy, price, and performance to fit your shooting needs. Aero Precision opts for high-quality 416R stainless steel from which to machine your new barrel which is fluted for additional strength. Their rugged upper gives you the benefit of forged aluminum strength and price but with the cool billet aluminum appearance. These are exactly the components you would pick to put together for yourself.

Of course, the Aero Precision AR-15 upper with fluted barrel comes with M-4 feed ramps for reliability, they know you wouldn't want anything less. Then there's the free-floating rail system. This must have perk gives your AR-15 fluted barrel upper a lean, mean, sleek look and feel. It's light, strong, improves accuracy, and gives you plenty of real estate for your grip preference and accessories. There's no need to mess around installing everything piecemeal and risk a mistake. Just grab an Aero Precision AR-15 upper with fluted barrel and your build is on the right track. 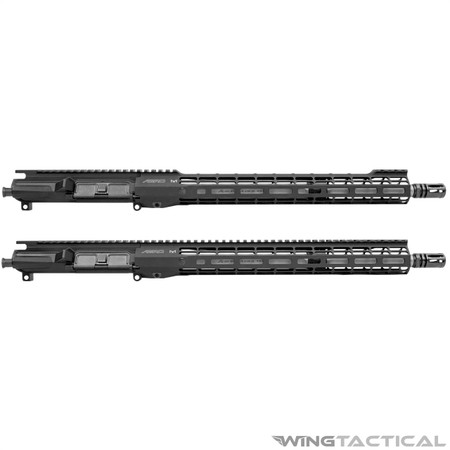