In today’s market, there are many high-quality handguards available, but most of them are not cheap. Let’s face it, not all AR-15 owners have the budget to build a two-thousand-dollar AR. This is where the 2A Armament Builder Series Handguard comes into play. The Builder Series free-float handguard from 2A Armament gives your AR-15 durability, light weight, and abundant mounting space for a very competitive price.

This inexpensive free-float handguard is machined out of 6061-T6 aluminum, a material known for its strength and minimum weight. This handguard is anodized with type-3 hardcoat, allowing it to stand strong in the face of rust and other corrosive elements. The skeletal design keeps the weight to a minimum without giving up durability. It also allows for more ventilation - a great benefit when shooting hundreds of rounds quickly and heating up the barrel!

The 2A Armament Builder Series Handguard features a unique angle on the front end, gives your AR15 a slick, streamlined appearance. Because of the 3-screw mounting design, this affordable handguard will stay securely in place after mounting.

You'll never run out of room for accessories on this rail system; it has a continuous 1913 Picatinny rail on top as well as M-LOK slots on both sides and on the bottom. There are also four quick detach sling mounting points so that you can position your sling however you like it.

It's not easy to pack so many benefits and features into a handguard with a competitive price, but 2A Armament has made it happen with this Builder Series Handguard. 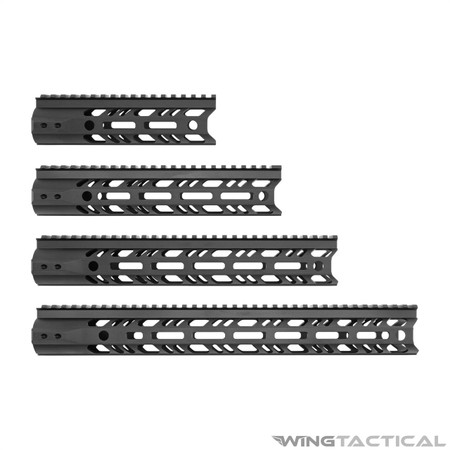