*Magazine Catch thread is metric and will not work with California Compliant Bullet Button or other third party mag release buttons.

Whether you start out to do a major upgrade on an existing rifle or plan on building that perfect system from the ground up, the sheer number of small parts that need to be added to the purchase list can be overwhelming. Of course, the performance of each tiny spring and pin is also important to the functionality of the rifle as a whole. For many armorers, the best way to handle the upgrade of an AR-15 lower is to use a pre-packaged lower parts kit like one of the Strike Industries AR Build kits.

If you’re upgrading a lower receiver, there’s no need to wade through a sea of inferior parts. A Strike Industries Enhanced AR-15 Builder’s Lower Parts Kit includes high-quality versions of everything on that laundry list of small but important lower parts and leaves you the freedom to use the large trigger parts that fit your shooting style. No guilt over wasting money on duplicate parts, and no compromise with a trigger you didn’t want.

The Strike Industries Enhanced Lower Kit features many of the same reliable parts as Strike’s other AR build kits, but offers some premium upgrades for those of us who want the whipped cream and cherry on top. The improved gripping surfaces on Strike’s Enhanced Bolt Catch and Magazine Catch Button are just two of those little extras included in this Enhanced Lower Parts Kit. Upgraded Pivot and Takedown Pins, as well as Strike Industries best selector parts, will push the performance of your upgraded rifle beyond the realm of simple expectations. If you want to build your dream rifle, use the Strike Industries Enhanced AR-15 Builder’s Lower Parts Kit. 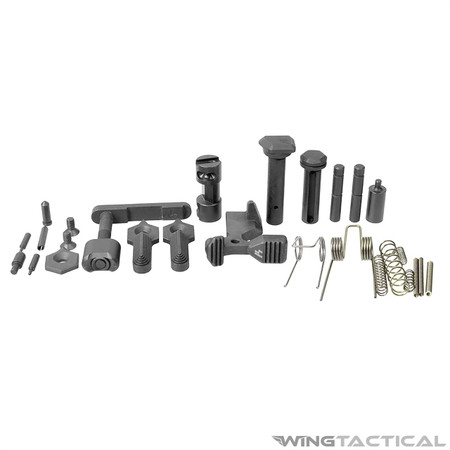