When you operate in the real-world, muzzle control isn’t just important, it’s essential. There are a lot of great brakes and suppressors out there. The problem with the vast majority of muzzle devices is that while they control excess motion, they create a concussive blast that makes it painful to work nearby. Since most tactical operators work in teams, this isn’t something that’s considered a plus, particularly in urban and close quarters combat situations.

There have been a number of attempts at creating a blast mitigation device, but most of them weren't all they were cracked up to be. Someone had to make a blast diffuser that actually works. VG6 Precision makes some of the best muzzle devices available, and they make a solution to the concussion problem too. The VG6 CAGE Device will bring your team back together and let everyone keep their hearing too.

VG6’s Epsilon and Gamma Muzzle Devices are some of the best motion control devices on the market, but to say they’re a little “snappy” might be the understatement of the year. For those who work along side other operators or who have mercy on the guy in the next lane at the range really need a blast diffuser that’s compatible with those brakes. The big catch here: It has to work without taking away from the control afforded by those superior brakes.

The Solution: The VG6 CAGE Device

VG6 took the bull by the horns and faced the challenge of making an effective blast mitigation device head on. What came out of the design lab was the VG6 CAGE, a Concussion Altering Gas Expansion device that fits like a glove with their popular muzzle devices.

How Does It Work?

The CAGE device manages this with a field of small holes that are distributed over the surface of the device as it wraps around the chambers of the Gamma and Epsilon Muzzle Devices. Those little holes help to slow down the gasses expelled from the brakes ports. That effectively slows down the dispersion of those gasses so that the energy they produce is dispersed more effectively and concussion is disrupted. The result actually allows the VG6 Brakes to do their work even more effectively. As energy is more gradually bled off rather than released in one rush, the remaining recoil becomes softer, smoother, and muzzle rise disappears. 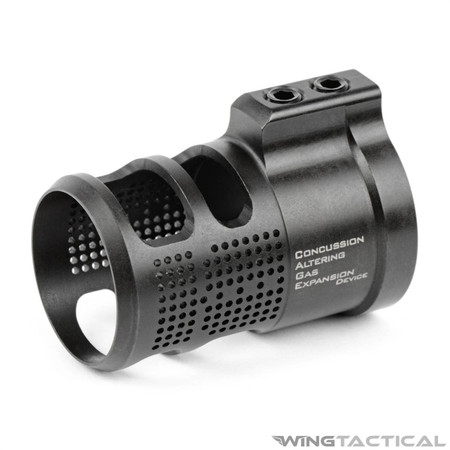