Are you ready for another upgrade to tweak your AR-15 just a bit more to your own taste? There are many goodies you can change out that will make everybody at the range green with envy. This one is quiet and most likely nobody but you will ever know it’s there. I’m talking about an AR extended mag release.

Two Out of Three Ain’t Bad

I’ve heard that out of good, fast, and cheap you can only expect two out of the three. In most cases this is true, but with the V Seven extended AR-15 magazine release button you can not only expect all three, you are guaranteed it. You will get a high-end CNC part machined out high- grade aluminum that is fast to install at a price you won’t believe. Just try getting a deal like that from the guy painting your car, you’ll likely be laughed out of his shop. You will get all three when you pick up your AR extended mag release along with the traditional V Seven lifetime guarantee and award-winning customer service from Wing Tactical.

In today's world of gimmicks and tricks, V Seven keeps it simple, your new AR-15 magazine release button simply does what it’s supposed to do each and every time. You will love the positive contact and performance of your AR extended mag release even if you're wearing gloves. Like every V Seven product, the finish is superb. This isn’t some shabby crap you picked up at a flea market, you will be proud to mate this V Seven AR-15 magazine release button with your baby for life. 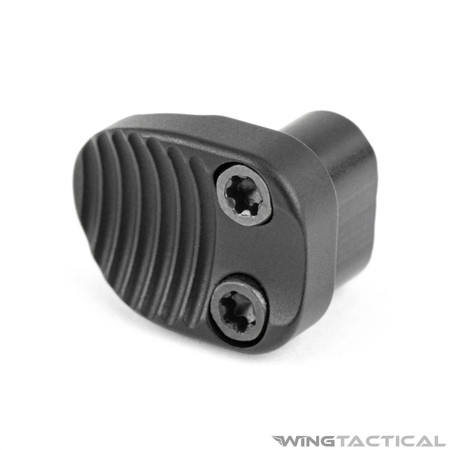