*The Noveske KX3 Flash Suppressor will work on any barrel length.

*The Noveske KX3 is classified as a flash suppressor by the BATF FTB.

Do you like to run an SBR or an AR-15 pistol? They're a viable option for inside, save your butt self-defense. However, we all know the fun of that SBR or pistol goes away in just a mag or two. That concussion sometimes feels like it's going to shake your teeth loose. A Noveske KX3 flash suppressor is the go-to muzzle device to take that concussion away downrange.

What Is So Special About The Noveske KX3 Flash Suppressor?

The Noveske KX3 Flash Suppressor is a high-performance accessory that lives up to the Noveske name! When installed on your AR-15, the KX3 directs the gases forward instead of to the sides, improving the safety of anyone standing adjacent to you. The KX3 also has the effect of negating much of the felt recoil. It even improves the reliability by enhancing the back pressure - a great benefit on short-barreled weapons. It is perfect for users of short-barreled rifles (SBR) or AR pistols, but it will deliver the same benefits on a barrel of any size.

The BATF classify the Noveske KX3 flaming pig as a flash suppressor, however, it behaves a bit more like a muzzle brake. While it is very effective in directing muzzle blast and concussion forward, the Noveske flaming pig serves to increase the backpressure in a pistol length gas system. In a properly set-up weapon, this increased backpressure can serve to reduce or eliminate FTE and FTF situations.

The chrome moly construction and thorough heat treating process gives this device the durability it needs to tough out long sessions on duty or at the firing range. Noveske ensures strict quality control by engraving a unique serial number on every device before it leaves the factory. The Noveske KX3 Flaming Pig Flash Suppressor is a must-have for anyone who shoots indoors or in close-quarters combat.

Noveske KX3 Flaming Pig Give Your Shorty A Astounding Look

he Noveske KX3 flash suppressor has some interesting dimensions, which depending on your set-up, could be a large benefit. The Noveske flaming pig shows up at 3.28 inches long and 1.35 inches in diameter. This little flash suppressor makes a wicked showing on a shorter barrel wearing a longer rail. If your weapons dimensions are right that mean little snout just sticking out of the rail will get your attention.

Of course, if you are putting together a home-defense gun, then the Noveske KX3 flaming pig would be the ticket. We would never suggest you fire a weapon without muffs. However, inside your living room at midnight, you may not have time for muffs. 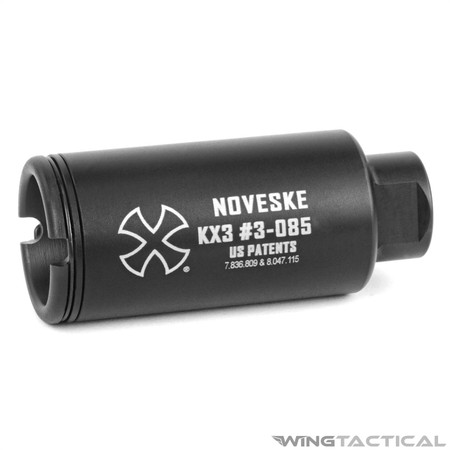