The Mossberg 590 A1 was built for the military and is a battle proven weapon. Now, if you have one for personal use I'm going to bet it's not just for show or shooting bunnies. This is a shotgun that you can depend on, therefore, anything you add to it has to be of the same quality. So, when you want a sling mount you should naturally turn to Magpul. They make a Mossberg 590A1 front sling mount you can bet your life on. A sling is crucial for shotguns that will be carried on duty, and you'll also need a place to attach it. With the Magpul Forward Sling Mount for the Mossberg 590A1 shotgun, you can easily attach a sling to the shotgun without making permanent modifications!

The Magpul Forward Sling Mount for Mossberg 590A1 is simple and efficient. The halves of its solid cast steel body separate for quick installation that literally takes minutes. I know, the cap on the magazine tube is already threaded on the 590A1 but you better not count on it. That's a lot of pressure to be placed on just one little screw all the way up there on the end. The Mossberg 590A1 sling mount is designed to clamp on both the barrel and mag tube, now that's the way to do it.

Mossberg 590A1 Front Sling Mount Give You Options

You simply install the piece between the barrel and the magazine tube. It is made to accommodate the 590A1's wide barrel, so there's no need to take it to the gunsmith or spend time hand-fitting it yourself. You can use this mount to attach your quick detach swivel as well as other mounting devices like the HK Hook, MS3 Paraclip, the ITW MASH Hook, and more.

Even if you're not sure if you want a sling this is a good choice. Clamp a Magpul Forward Sling Mount for Mossberg 590A1 on there anyway. It doesn't cost an arm and a leg and the presence of a Mossberg 590A1 front sling mount gives you the option of adding a sling later. Additionally, the Mossberg 590A1 sling mount is classic black, it matches the attitude of your shotgun. 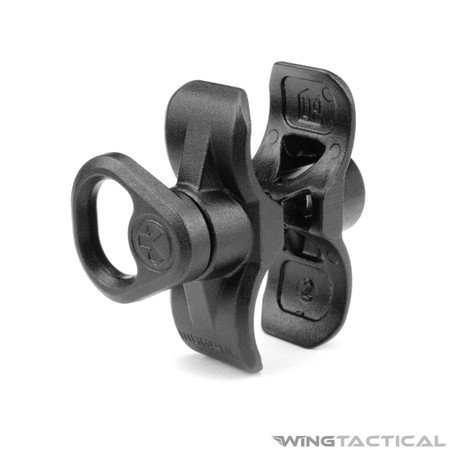