When you pull the trigger of a loaded gun, a shot is fired. It seems simple, but there's a lot that goes into that system. A trigger's basic function is to begin the firing cycle that discharges a round. How that cycle is initiated can vary based on what type of trigger you are using. 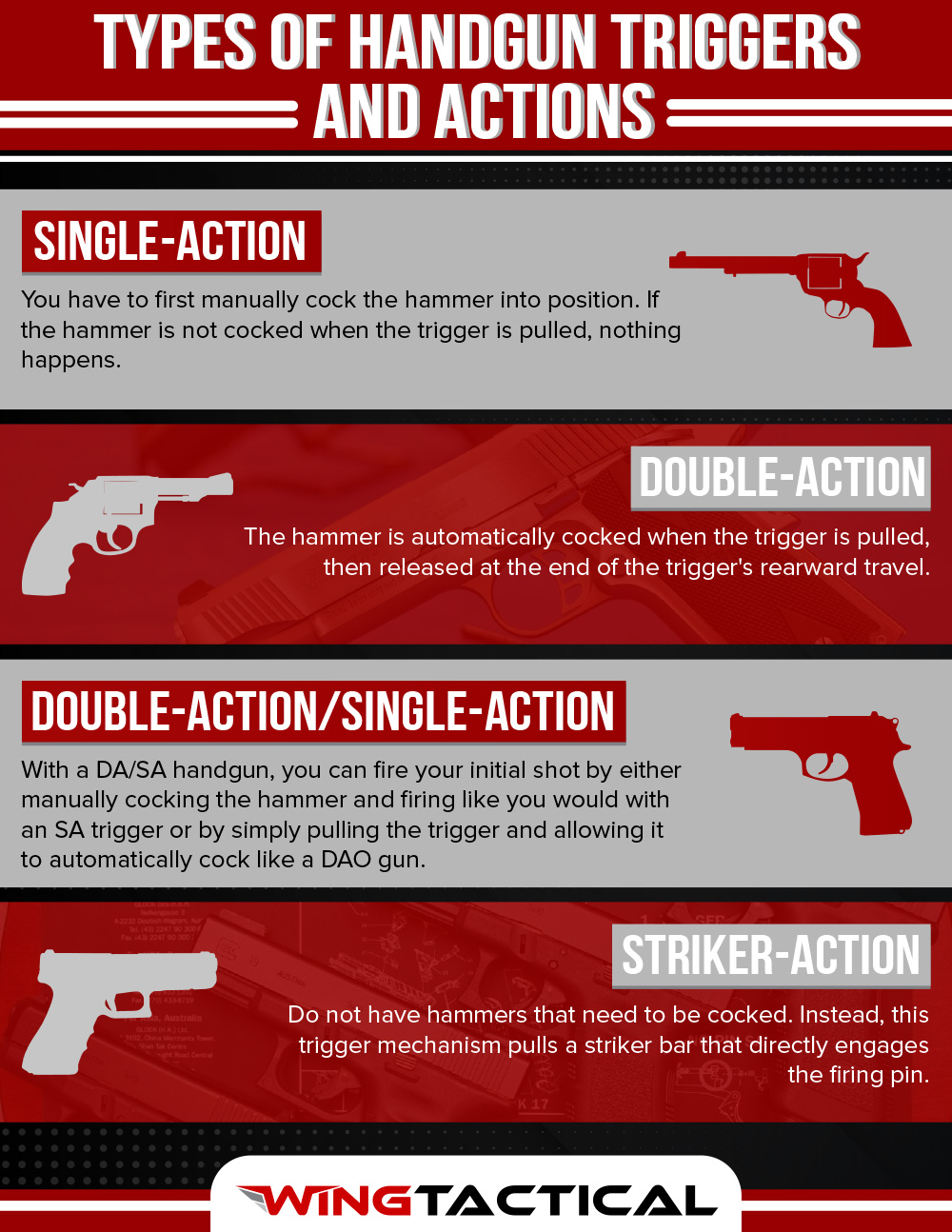 There are four primary types of triggers, each with their own unique characteristics.

Single-action triggers (SA) complete one action when pulled — releasing the hammer to fire the gun. For this type of trigger to work, you have to first manually cock the hammer into position. If the hammer is not cocked when the trigger is pulled, nothing happens.

The primary advantage of SA-type triggers is their simplicity. Because the trigger's sole job is to release the hammer, it requires only a short, light press, at which point it hits the pistol trigger wall — the heaviest weight felt prior to release of the sear. Successfully firing at targets may be easier with SA pistols because pulling the trigger requires little pressure and motion.

The hammers of guns with double-action-only triggers (DAO) are housed within the gun's body and cannot be cocked manually. Instead, the hammer is automatically cocked when the trigger is pulled, then released at the end of the trigger's rearward travel. In this setup, pulling the trigger completes two actions by both cocking and firing the pistol.

DAO triggers have a much longer, heavier pull because the user first has to compress the hammer spring — cocking — before the trigger reaches the point at which it releases the hammer. The harder pull of a DAO trigger is considered a safety feature since a heavier trigger is harder to pull by accident. You'll often see this design in firearms intended for self-defense.

Double-action/single-action (DA/SA) trigger systems can function as either single-action or double-action firearms. With a DA/SA handgun, you can fire your initial shot by either manually cocking the hammer and firing like you would with an SA trigger or by simply pulling the trigger and allowing it to automatically cock like a DAO gun.

Following the initial discharge, the rearward motion of the slide will cock the hammer, meaning that all subsequent shots will be fired with an SA trigger mechanism. Firing a DA/SA trigger gun requires a little extra concentration because you have to transition from the harder pull of the first DA shot into the SA's lighter pulls.

Striker-action triggers — also known as striker-fired or SF triggers — do not have hammers that need to be cocked. Instead, this trigger mechanism pulls a striker bar that directly engages the firing pin. When the trigger moves the striker to the designated point, the striker slips free, striking the primer to fire the round. This system provides a smooth trigger pull that remains consistent with every shot.

The major disadvantage of SF trigger mechanisms is the lack of external safety features. Some manufacturers have addressed this concern by developing several internal safeties to mitigate the chance of accidents.

If you've ever wondered why some pistols appear to have two triggers, the answer lies in the safety features. In most cases, the secondary "fin" is a safety mechanism — if the shooter does not properly engage the pistol trigger, the fin strikes the wall of the frame and prevents the striker from moving.

Once you understand how your trigger works, you'll know what accessories or modifications you can add to improve your firearms. Add-ons like binary triggers — which fire on both the pull and the release — can alter your gun's functionality to make it faster and more effective in competition and self-defense situations.

At Wing Tactical, we offer an  extensive catalog of top-quality products to help you optimize your firearms.