**Not compatible with most gas piston systems

For many shooters, the change to a free-floating handguard is hard to make. You like the idea, but when some assembly is required, you don't want the hassle. Sometimes a simple M-LOK handguard almost requires an engineering degree to attach to your gun. However, that is not the case with the Strike Industries GRIDLOK handguard. You will literally attach this rail to your weapon in seconds.

Time Is On Your Side

Strike Industries has built its empire around the drive for innovation. SI doesn't just make gun parts. The company focuses on designing solutions for problems. Solutions for SI result in new products. SI invested a full two years of research and development in their Strike Industries GRIDLOK handguard. In both its appearance and application, the GRIDLOK takes the ordinary M-LOK handguard to extremes never before seen. You will see M-LOK slots surrounding the GRIDLOK. Additionally, SI includes Picatinny rail sections both in the front and rear with a little bonus. That little plus is an integrated flip-up front sight.

The Hard Part's Over

Other than attaching an ordinary free-floating rail, taking it off is the next worst thing. Even though you hate to think about it, sooner or later you're going to have to remove any rail. If nothing else there's routine maintenance and cleaning. Perhaps you're running a specific adjustable gas block. In your world, there will never be another gas block for you. But, you can't adjust it with the handguard in place. With the Strike Industries GRIDLOK handguard, that's no longer a problem. SI designed a proprietary barrel nut along with a quick-release lever for the GRIDLOK. The unique design makes this M-LOK handguard the quickest to install or remove in existence. 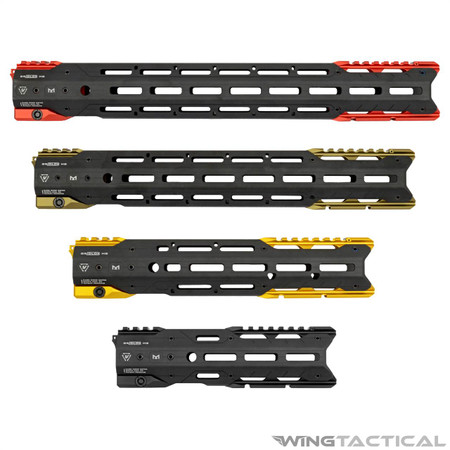