**Anodized areas that touch between the end plate and castle nut will have expected minor scratches from torquing of the castle nut.

**Due to various factors that take place during the anodization process, the color lines from batch to batch of a certain product may vary.

How many times have you went to remove the castle nut on your AR, slipped and scuffed it? I know, if it's staked properly, it can be hard to break loose and things happen. It's just a little thing, you can barely see it, but you know it's there. When you change to a Fortis K1 Castle nut locking system you will never have to mess with staking that thing again.

There Is Another Way to Skin A Cat

The revolutionary design of the Fortis tapered castle nut is made to work with the Fortis LE End Plate. Together they securely attach your buffer tube without having to stake anything in place. The outer circumference of the tapered castle nut wedges itself into the tapered inner surface of the Fortis LE End Plate to create a perfect bond that virtually guarantees it won't back off. Of course, you are still going to want to use an armorers wrench to torque down the Fortis K1 Castle nut, but it will stay tight without having to stake it in place.

One Less Step When Installing the Fortis K1 Castle Nut

Properly staking a castle nut isn't really that big of a deal, but sometimes breaking it loose can be. I worked on a friend's AR once, he had used Locktite on the castle nut on top of staking it. It took heat and some bad words to get it loose. Well, the Fortis LE End Plate combined with the fitted, tapered castle nut locks in tight and comes off easily, heat and bad words are not requried. Additionally, Fortis machined an attachment point for a QD sling swivel into the enhanced endplate. This cutting-edge convenience should be on your gun today. 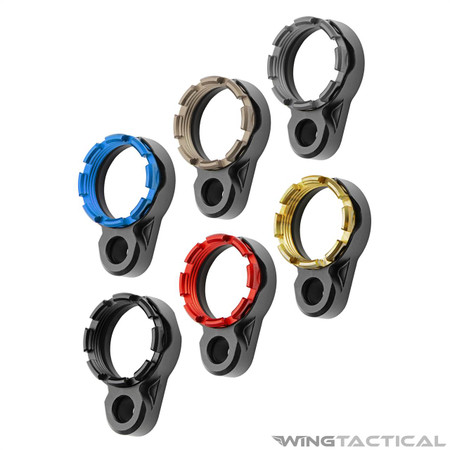