If you’re interested in improving the operation of your AR-15, consider the Strike Industries Enhanced Bolt Catch.

The AR-15 bolt catch locks the bolt carrier group in the rear position when your magazine has been emptied. This AR bolt catch also allows you to release the bolt when you’ve reloaded and are ready to resume firing. Because of its function, it is important that the bolt release be sturdy and easy to manipulate.

The Enhanced AR-15 Bolt Catch by Strike Industries features a bold, ridged pattern to assist in providing positive finger engagement. The extra-wide lever surface allows for simpler finger operation and improved finger contact. This bolt release will fit snugly on all Mil-Spec AR-15 lower receivers. Made from solid steel, this release will give your AR a noticeable edge over the competition, while at the same time providing you with a sturdy mechanism to catch and release your bolt.

Strike Industries has been in the business of supplying gun owners with high-quality parts and supplies since 2011. The operators of the company are avid gun users who understand the needs of those who shoot firearms regularly. Strike Industries is committed to providing tried-and-true tools to AR owners of all types.

Wing Tactical is staffed by shooters. We know what shooters need and we want to supply you with the very best parts to make your shooting experience the best it can be. It doesn’t matter whether you’re an active duty military war fighter, a member of law enforcement or a simple firearms enthusiast, you want your rifle to operate smoothly with a minimum of hassle in the field. At Wing Tactical we understand that smooth operation isn’t always just a function of the large components of your weapon system. Sometimes little things, like an enhanced AR-15 bolt release can make all the difference.

If it’s on our website, we know what it does and why you might need it. From an AR-15 bolt release to enhanced safety selector switches, we're familiar with all the little helpers we stock. If you need something to solve a problem for you, we can help you figure out what fits the bill.

At Wing Tactical, we work with the most forward thinking companies in the small arms industry. If there’s an upgrade that addresses an issue, we’ll find it for you. It’s not just about turning the most volume in sales, we want our customers to have what they need at a great value. That’s something that’s important to you, it’s important to us, and it’s important to the companies we work with. As gun people, we have a great deal of common ground and we want to keep it that way. When you contact Wing Tactical you’ll hear back from someone who speaks your language every time. 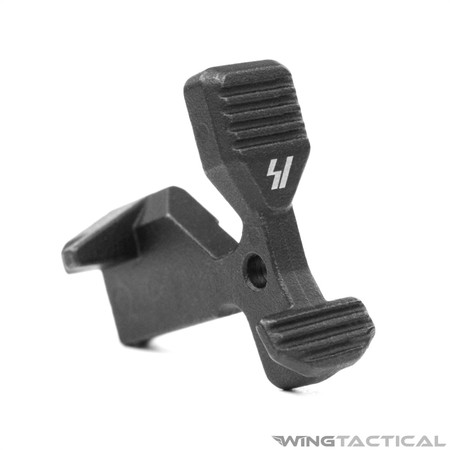