There are a number of reasons you would want to buy a Bravo Company buffer tube kit. Some of them are for a new build, to upgrade from an inferior buffer system, or to replace worn out or broken parts. The first one, a new build, that one is a personal choice. However, they're a lot more options for collapsible Mil-Spec stocks on the market for the BCM receiver extension than its Commercial counterpart. It only makes sense to give yourself more options.

Now, consider for a moment the force that is imparted to and given out from your rifles buffer assembly with every shot fired. Your bolt carrier group slams back into the buffer and inside the buffer tube before cycling back home. You definitely want a high-quality BCM receiver extension there to make it happen. A Bravo Company buffer tube kit gives you top-shelf quality at a price point less than many of its low-quality competitors.

Why Can't I Only Replace My Old Buffer Tube with The BCM Receiver Extension?

A BCM buffer tube kit obviously includes a new spring. So, why is that a reason? Perhaps you have bought a used gun, or your existing weapon has run a bazillion rounds. Well, a standard carbine length buffer spring has between 37 and 39 coils and should be 10.5 inches long. A used spring could have been cut or a well-used spring could be collapsed. So, break open your AR then simply count the coils and measure the spring. Then, scroll back up and get you a new BCM buffer tube kit.

Save Time and Money, Get The Bravo Company Buffer Tube Kit

The Bravo Company AR-15 Buffer Tube Kit allows you to get the best parts for your buffer tube system all in one convenient purchase. All of these components are built to the high standards that make Bravo Company a favorite of military personnel, law enforcement officers, and shooting sports competitors.

The buffer tube itself is machined from 7075-T6 aluminum, which offers a rare combination of weight savings and amazing durability. Six positions allow you to get your adjustable stock in a spot that fits your body and shooting stance. The weight of the carbine buffer has been carefully adjusted to eliminate as much felt recoil as possible. The action spring is made of durable spring steel, and it won't wear out and become weak within the lifetime of your AR-15.

You don't have to spend time comparing brands and selecting components for your buffer tube; this kit from Bravo Company gives you the entire system made by a company with a well-deserved reputation for excellence! 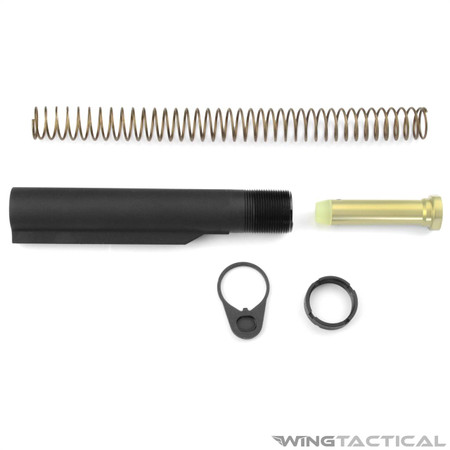