Little things mean a lot. That sentiment never rings truer than when you’re picking components for a special rifle build. Whether you need a lightweight endplate for a low mass competition system, or you just want to save carry weight, The Radian Weapons Ultralight AR-15 QD End Plate is the lightweight AR-15 End Plate you want.

The Radian Weapons Ultralight QD End Plate isn’t just any old endplate, it’s precision engineered and machined from 7075-T6 billet aluminum and features a titanium quick disconnect sling swivel cup. The aluminum is Mil-Spec Type III hard anodized to protect it from the rigors of real-world duty. The tough titanium swivel cup is press fit into the plate body so you can rely on this AR-15 End Plate it to complete your ambidextrous build and serve longer than many common end plates on the market.

The Radian Ultralight QD End Plate weighs in at only 6.5 grams and attaches to either Mil-Spec or commercial type carbine buffer tubes using a standard castle nut. It’s an easy to install accessory for AR-15/M16 platform rifle systems that offers an easy sling mount that works comfortably for any operator.

Radian Weapons manufactures every part as though lives depended on them because they often do. The Radian commitment to quality manufacturing guarantees that when you take their products into the field, you can rest easy knowing you’ve got battle tested equipment designed with the modern operator’s needs in mind. When you’re in the field, the last thing you need to worry about is whether your weapon is fit for duty. Radian makes sure you don’t have to. 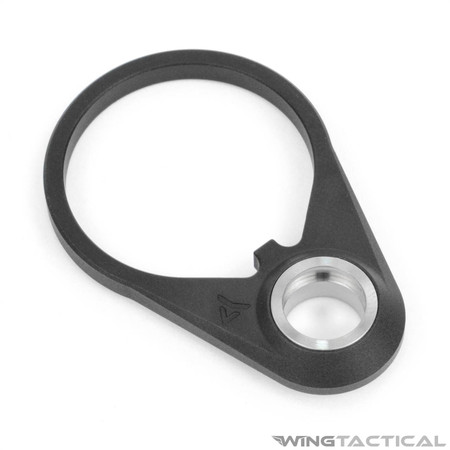