Do you ever give much thought to the endplate on your AR? A lot of people don't give it a second glance unless it's some flashy, engraved thing. Sure, you could go that way, but let's look at the endplate for what it is. This thing is meant to keep your AR together under some extreme forces. Do you want bling, or do you want something strong? An endplate that you know can stand up to the task.

Check out what our military uses on their weapons. That's right. The US military uses a MIL-Spec steel endplate to hold its weapons of war together. War is Hell. If you pick the wrong AR15 QD end plate, you'll have Hell to pay. An IWC QD end plate is machined from a solid steel billet. Believe it or not, some of our competitors’ laser-cut or even stamp out their endplates. Every edge on the IWC QD end plate is machined nice and smooth. You won't mar the threads on your buffer tube or snag your gear while operating. Depending on which endplate you choose, QD can mean quick detach or a quick death.

They endow the IWC QD end plate with a rotation limited QD sling swivel socket. Those words mean that your sling isn't going to wrap your weapon and leave you in a bind. Additionally, if you go with the popular single-point sling system, the strength of your AR15 QD end plate is crucial. A lot is riding on that little QD socket. You want a battle-tested, MIL-Spec, machined steel IWC AR15 end plate on your weapon when you're on the line. 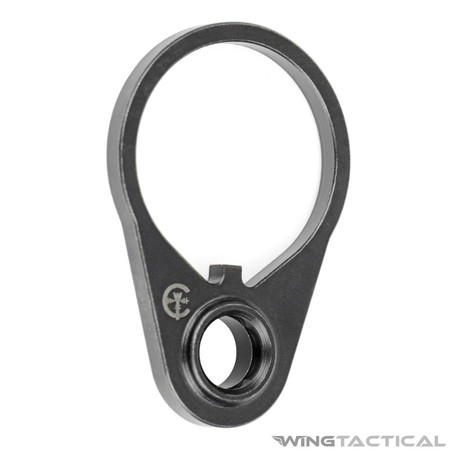