Whether you’re choosing parts for a competition rifle, a weapon you will rely on in real battlefield conditions or a personal defense weapon, you want quality parts that are designed for the job. The MVB Industries ARC-X Collapsible PDW Stock is an excellent choice if you’re looking for a collapsible stock that will work with your choice of Mil-Spec bolt carrier.

The ARC-X Supports Both Piston and Direct Impingement Systems

The MVB PDW Stock allows a lot of flexibility for those of you who like to swap out favorite stocks from one rifle or another, or who prefer the level of continuity provided by using the same model of stock on multiple rifles. It doesn’t matter if you run a direct impingement or a piston operated system, the ARC-X Stock is the collapsible stock that works with just about anything you want to marry it to.

The MVB ARC-X Collapsible Stock is supplied with the proper springs and buffer for your application. Order your MVB stock with a standard H1 buffer, or a heavier, H2, or H3 buffer. All the buffers are compatible with your favorite Mil-Spec dimension bolt carrier groups.

The ARC-X Stock is Easy to Operate

The ARC-X PDW Stock is a five-position personal defense stock that is easily operated with one hand. You can easily lock it in closed, fully extended, or any intermediate position without unnecessary fumbling and forcing. After all, when you’re in a situation that requires a personal defense weapon you don’t have time to play with your stock. When the chips are down, the MVB ARC-X Stock is the one you want on your side. 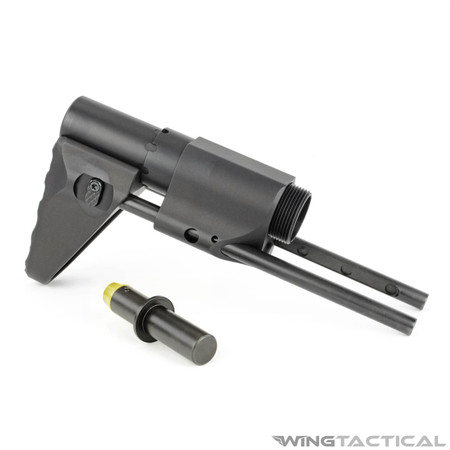