When you’re building a rifle, there are a lot of little things that can have a huge impact on the way it will perform in the real world. It’s all too easy to leave those small parts as an afterthought or to fail to give their selection the attention it really deserves. If you need an AR10 bolt catch, it’s easy to make a good choice without a lot of hunting. Wing Tactical offers Forward Controls Design’s AR-10 Bolt Catch the ABC/R 7.62, an ergonomic 308 bolt catch that includes design features that make it a quality choice for your next build or upgrade.

The ABC/R began as a component designed for the AR-15. It was so well received that recreating it and an AR10 bolt catch could have been a no-brainer, but that’s not the way Forward Controls does things. Before bringing the ABC/R to the 7.62 they took the wisdom gained from the first run and the input of the operators who used them and tweaked the design to make it better. The ABC/R v2 isn't just the v1 made into a 308 bolt catch, it's stronger and slimmer than its predecessor and features an extra durable black nitride finish that won’t wear off when it’s put to task.

Forward Controls Design specializes in the design and manufacture of control components for the tactical weapons operator. Their goal is to provide quality components with solid ergonomics that support and improve the way the operator interacts with his weapon. They aren’t interested in fashion, but if function is your main priority, they’re on your team. Forward Controls components are simple, elegant, and effective, without worrying about the flavor of the month in tactical fashion. 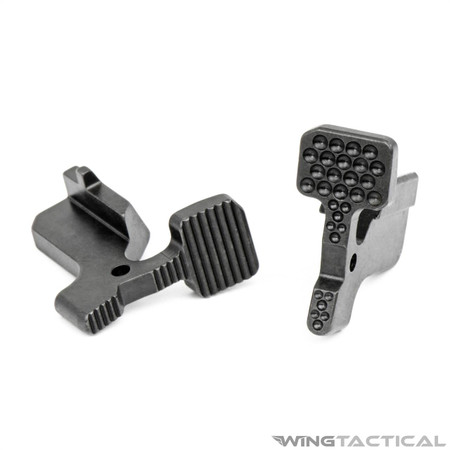