**A full-auto (A.K.A. M16) bolt carrier installed in a standard semi-auto AR-15 will not make the gun fire full-auto.

You need a Mil-Spec bolt carrier group for your next build, but you won’t settle for just any old off-the-shelf parts. If you want a full-mass bolt carrier group you can rely on to operate more smoothly and reliably than the rest of the pack, take a look at the Odin Works Bolt Carrier Group.

The Odin Works Full Mass Black Nitride Bolt Carrier Group is made to Mil-Spec dimension, but it’s so much more than a standard Mil-Spec BCG. The Odin Works BCG is machined from 8620 Case Hardened Steel. It’s coated with a low-friction black nitride finish for superior lubricity with less reliance on added lubricants. That’s just the most obvious improvement you’ll find over the competition.

If you look closer, you’ll find that Odin Works has done a lot of things to make this Odin Works Bolt Carrier Group a better buy than the competition. They’ve included a Gas Key made from 4130 Hardened Steel. It’s held in place with grade 8 hardware in a valley specially milled into the body to keep it in the proper position, even under heavy use.

The Odin works BCG features cam and firing pins constructed of the best materials available, not just carved out of a common stock. The cam pin is made from 4340 hardened steel for longer, more reliable service than run of the mill pins. Odin Works has taken special care to give you a firing pin that operates flawlessly without fail. They’ve begun with 8740 steel, sent it through a center-less grinder for a superior finish and then given it a Hard Chrome coating.

The bolt included with the Odin Works Bolt Carrier Group is true to Mil-Spec dimensions. It’s 9310 Case Hardened Steel that has been CNC ground after heat treating to give it a more precise fit than you’ll find in most other Mil-Spec carrier groups available on the market.

Put it all together and you have one of the smoothest, most-reliable full-mass bolt carrier groups you’ll ever find. Odin Works quality and attention to detail will make your build a cut above. It’s up to you to decide if you want to share your secret or just tell them you used Mil-Spec parts. 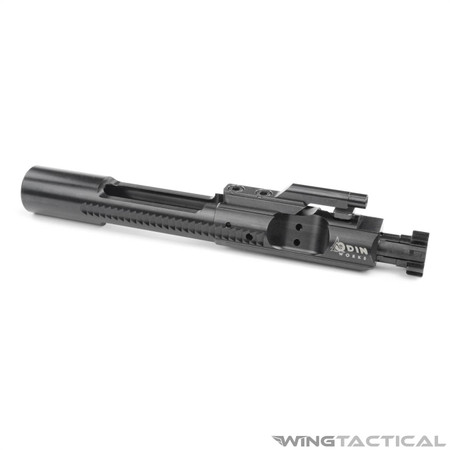