*Note that because of its shorter travel, a short stroke Silent Captured Spring will not actuate the bolt catch on 9mm carbine receivers unless you have the current version of JP 9mm bolt assembly.

*The 9mm Silent Captured Spring (SCS) requires an open channel in your 9MM bolt assembly for the guide rod to pass during fire. For most bolts, this will require you to remove the pinned-in central mass at the rear of your 9MM bolt. To function with the SCS, this central mass must be removable, and the bolt must still be at its full length without it.

Pistol caliber carbines usually have a direct blowback mechanism, which means that they only use the weight of the bolt to keep the pressures contained in the chamber. This works great with pistol calibers and is a simple operating system. However, the heavier bolt can sometimes lead to heavier recoil.

Though the recoil of 9mm is very controllable in an AR platform, you can make it even lighter by using the JP Enterprises Silent Captured Spring Full Stroke 9MM AR Buffer System. This system uses tungsten and steel buffer weights and a smooth aluminum guide rod which decreases vibration and friction for a smoother and quieter operation.

This buffer system can also create a softer recoil impulse, helping you control the weapon more easily. This buffer system is also designed to work more reliably when shooting +p ammunition or other hotter loads.

The JP Enterprises Silent Captured Spring Full Stroke 9MM AR Buffer System has more room to allow the bolt to lock back after firing the last round. Moreover, it has a sufficient dead blow effect to avoid bolt bounce. 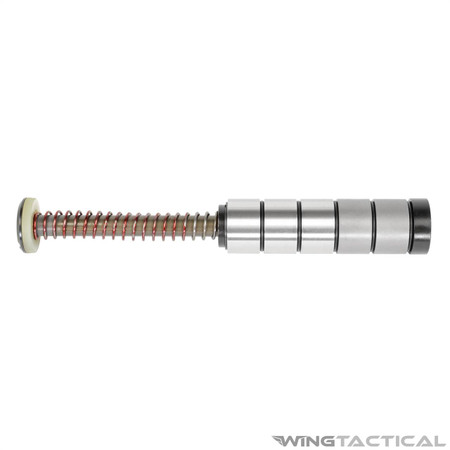