If you want to build an AR pistol, SBR, or pistol caliber carbine that packs a mean punch, .45 ACP is a great choice. It is a very popular caliber and delivers a lot of stopping power on target. The CMMG Banshee MkG complete upper is an excellent option to consider.

Though this upper assembly is available in a wide range of configurations, this one is chambered in 45 ACP and comes with a 5-inch barrel. The best thing about the CMMG Banshee .45 ACP 5" MkG Complete Upper is that it uses the Radial Delayed Blowback system, which creates a softer recoil impulse compared to typical straight blowback systems common in most pistol caliber carbines.

The CMMG Banshee MkG upper assembly comes with a 4140 Chrome Moly Steel barrel with a Salt Bath Nitride finish. The barrel is also threaded and equipped with the CMMG ZEROED Linear Compensator for 45ACP, which decreases the felt recoil, and improves performance.

The MkG Upper receiver is made from billet 6061-T6 aluminum and equipped with CMMG ZEROED accessories like the ZEROED AR15 Polymer Dust Cover and an ambidextrous charging handle. This upper assembly includes a .45 ACP bolt carrier from CMMG, which is HPT and MPI tested for quality assurance. 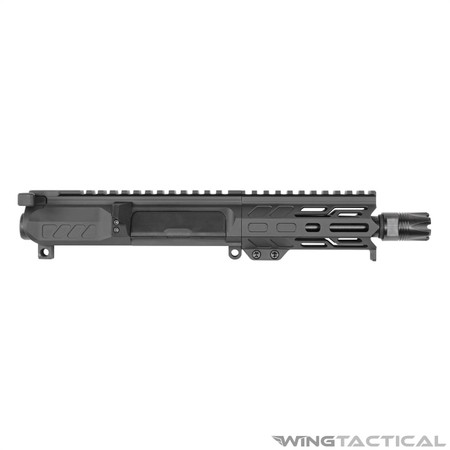