If you’re looking for a new AR Ambi safety for your tactical rifle and really want the ease of a 45-degree safety without altering your existing 90-degree receiver you might have been told you’re asking too much. If you were under the impression that your dream safety was just an illusion, you can quit pinching yourself. Armaspec has made your dreams a reality with the AST90, their 90 Degree Short Throw Safety Selector.

Just a Flick of Your Thumb

That’s all it takes to operate the Armaspec AST90 short throw safety selector. The AST90 is an assisted short throw™ safety selector. It operates like a 45-degree safety from the operator’s perspective. Just flick the lever to the 45-degree point and the AST90 will continue on its own to the 90-degree mark and your safety will release as though you had muscled it all the way through.

The AST90 gives you the rapid disengagement you want while maintaining the original safety functions of your weapon. You don’t have to change your grip to operate this AR Ambi safety because you don’t have to extend your reach past the 45-degree point.

Everything You Need in a Safety Selector

This is the AR Ambi Safety Selector everyone’s been waiting for. Use it with the receiver of your choice and get the ergonomic and speed benefits of the short throw safety selector. There’s no learning curve to master, nothing to alter in your rifle. The Armaspec AST90 drops in and works like a dream. 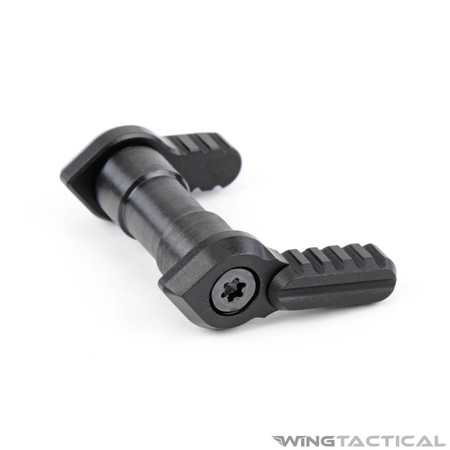