When you had your first AR, how long was it before you started thinking about what to upgrade? Of course, for some people what comes out of the box does just fine. I daresay for most of us, our minds wander through the list of upgrades like a kid in a candy store. For decades the name Timney has been associated with quality triggers. Now they can be a part of your AR, for less than you think.

Aside from the trigger, you likely use the safety more than anything else. Every time you thumb a Timney AR 49ER Safety Selector, you will feel that classic Timney quality. The Timney safety selector is a precision machined component that is engineered to work with you and your AR. The first time and every time you use your Timney safety selector, you will feel its super-smooth, positive engagement.

The First With The Most

The Timney AR 49ER Safety Selector gives you not only superior performance but options as well. Maybe you're an old-school shootist who believes in a traditional 90-degree throw safety selector is what belongs on your AR. Perhaps the speed of a 49-degree short throw safety selector is what you're going for. Well, this is it. The Timney AR 49ER Safety Selector can be configured in either fashion and rather quickly I might add. Could be that you like the idea of both of those options but the ambidextrous thing just turns you off. Guess what, the Timney safety selector comes with an end plate. You can easily remove the ambi side of the selector, blank it off with the end plate and run it that way. 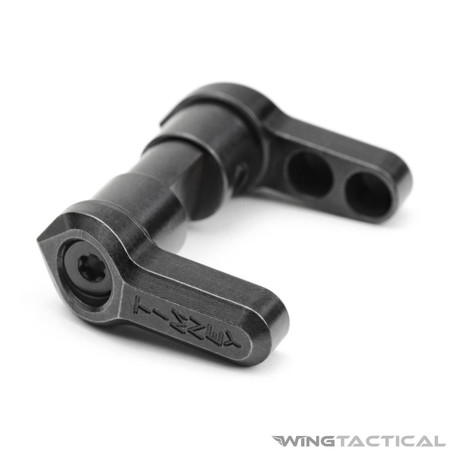