When you’re looking for big performance in a small form muzzle device, the Strike Industries Mini King Comp is a great choice for .223/5.56 AR-15 platform systems. It won’t make a pistol or SBR build nose-heavy but it mitigates barrel rise so well that you’ll be happy to have it on your range rifle as well.

It Doesn’t Have to be Bigger

While there are a lot of guys who might tell you that size matters, the design team at Strike Industries has taken the time to prove otherwise. They’ve taken concepts that made the original King Comp a hit and recreated the same performance curve in a more compact form, the single-chambered Strike Industries Mini King Comp for 5.56/.223.

The Elements Are All Here

All of the design elements that produce the exceptional performance that made the King Comp a hit are here in the AR-15 Mini King Comp. The Strike Industries Mini King comp is a more compact lighter comp that uses a single baffle to contain and redirect gasses forward while precisely placed ports help stabilize the muzzle. Felt recoil and muzzle rise are mitigated allowing you to better control not only your first shot but each follow-up shot. Better control also gives you faster acquisition of subsequent targets. The AR-15 Mini King Comp finishes in a pronged crown, that not only looks great but also offers a degree of flash suppression, making it easier to keep your eye on the target. 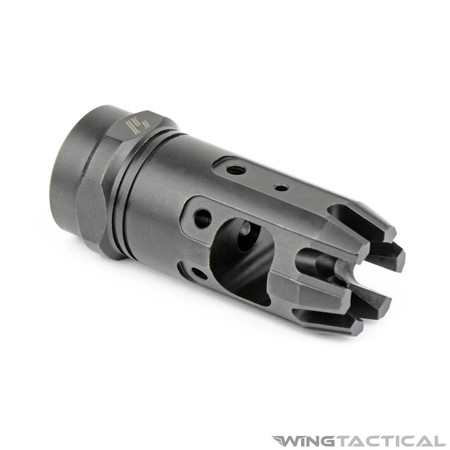