If you’re looking to improve the function of your carbine length AR without changing out a ton of parts, there’s an easy answer. All you really need to do to vastly improve the performance of your AR-15 is to upgrade to a Spikes Tactical Buffer. While there are a number of buffers on the market that you might choose, Wing Tactical offers one that stands out from the crowd, Spikes Tungsten Buffer will outperform the competition. Spikes Tactical T2 Buffer is easily one of the most effective single component upgrades you can make to a carbine length AR-15 in terms of effectiveness.

Why Is Spikes Tungsten Buffer the One I want?

The buffer is a critical component of an AR-15 and goes a long way towards mitigating recoil. Spikes tungsten buffer is a heavyweight buffer for the AR-15 that is unique in its class. They are machined out of solid aluminum and filled with a core of either tungsten powder or bar stock, depending on which model you select. The Spikes T2 Buffer is a machined billet body filled with crushed tungsten powder. This tungsten powder buffer takes the snap and jerk out of the average carbine AR system and replaces it with a Cadillac smooth, easy to control action that’s quiet too. Since there aren’t any reciprocating weights, they greatly reduce the cycling noise and allow your AR-15 to cycle smoother. Unlike the competition’s buffers, Spikes buffer doesn’t require maintenance and won’t leak mystery fluids in your buffer tube when its least convenient. There are no chunky, clunky internal weights to put up with, just a smooth riding tungsten powder buffer that you install once.

What Is the Difference Between T1, T2, and T3 Buffers?

Both T1 and T2 buffers are filled with tungsten powders instead of solid weight like standard buffers. The T1 buffer is a standard model designed for AR-15 carbines. The T2 buffer is a heavier upgrade intended to reduce recoil further. The T3 buffer is filled with sliding tungsten weights, it is the heaviest model, built for full-auto or suppressed rifles. It is also great for rifles prone to over-gassing. No matter what type of AR-15 you are running, Spike's Tactical has you covered with the T-series buffer.

Spikes Buffer: The Softest Bang for Your Buck

While you could pour a lot of money into an AR system to settle it down, it makes a lot more sense to start by changing out the component that gives you’re the best value for your money. While the cost of upgrading your buffer is nominal when compared with some of the other upgrades you might make, it will give you immediate results that will give you more control over your weapon and make your shooting experience so smooth you'll wish you'd upgraded to a Spikes Tactical Buffer much sooner. 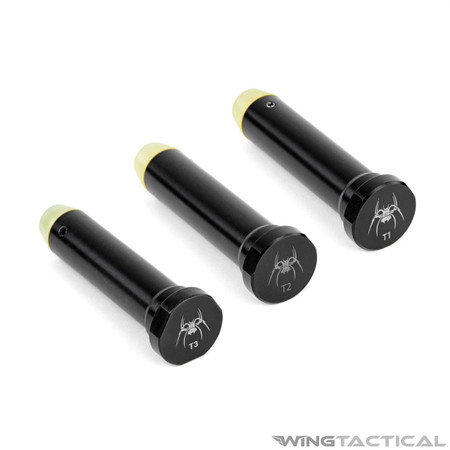