Strike Industries is one of the firearm industry’s leaders for a reason. While other companies are cranking out the same cookie-cutter parts or trying too hard to reinvent the wheel, Strike Industries continues to produce innovative designs that make a difference.

Take something as common as QD sling swivels. They’ve been around for years, but the presentation wasn’t perfect and nobody was doing much about it. Well, the design team at Strike thought better of it and now there’s a better QD sling swivel. The Strike Industries Quick Detach Sling Loop is like no other QD swivel you’ve tried.

Easy to Operate, No Binding

The Strike Industries Sling Swivel features a machined groove in the sling loop to control slide if it’s necessary to use a paracord sling in an emergency as well as advanced geometry in the loop itself that eliminates binding ad rolling of sling straps. It provides a convenient comfortable carry, regardless of your preferred hold.

Wing Tactical Proudly brings you the Strike Industries QD Sling Loop. It’s a great way to give yourself an edge whatever your operating environment or style. 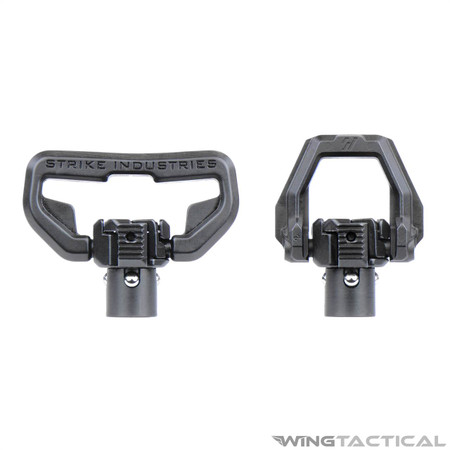