One of the most exciting parts of starting a custom AR build is that you are able to choose components and accessories that meet your specific needs and goals for your rifle or pistol. While many of your choices will center on maximizing speed, efficiency, and ergonomic features of the setup, there are also a great deal of options when it comes to optimizing the performance of the gun itself. In this arena, one increasingly popular choice is a custom AR build configured for the 300 AAC Blackout cartridge.

The 300 Blackout cartridge (also known as 300 BLK) was developed by the Advance Armament Corporation (AAC) to offer a cartridge for AR users with projectile mass and ballistics more in line with the 7.62x39mm AK cartridge. The dimensions of the cartridge feature less taper than the 7.62x39mm cartridge, and as a result are able to avoid the high bolt-thrust typical of custom AR builds for AK cartridges. Use of the 300 Blackout cartridge also allows the shooter to avoid the potentially crippling feeding issues that are typical of setups utilizing AK cartridges.

The External and Terminal Ballistics of the 300 Blackout

When assessing the external ballistics of the 300 Blackout, it's important to note that it isn't the best cartridge for long-distance shooting. The impact of air resistance (drag) and gravity causes the bullet to slow significantly when traveling more than 300 yards. However, it is extremely reliable in close combat and similar conditions. You can make accurate shots at up to 300 yards with supersonic ammo and 200 yards when using subsonic ammo.

Regarding terminal ballistics, the 300 Blackout delivers superior energy on target, which is a calculation derived from muzzle energy (the energy of the bullet as it leaves the gun) and the ballistic coefficient (how much energy the round loses on its way to the target). The Blackout achieves maximum muzzle energy when fired from a gun with a 9-inch barrel.

While the cartridge has clear points of departure from the 7.62x39mm AK cartridge, there are a few points of difference from the 5.56x45mm cartridge as well. The most noticeable is the sheer energy of the round -- with the introduction of the 300 blackout, AR shooters are able to enjoy the increased muzzle energy of a 7.62 round while maintaining compatibility with a wide range of standard equipment. Because of the higher projectile mass, the 300 AAC Blackout cartridge has a much more dramatic effect on the target, resulting in larger cavities for soft targets and deeper penetration overall. In fact, in terms of ballistics, the 300 BLK has over 16% more energy than a 7.62x39mm round at 300 meters.

The energy of the 300 Blackout cartridge is even more evident with shorter-barrel setups. When tested with a 9-inch barrel, the AAC BLK has the same muzzle energy as an M4 with a 14.5 barrel. This makes it not only a very powerful choice for short-barrel AR builds, but also a very versatile choice.

How to Build for 300 Blackout 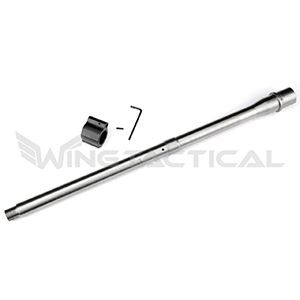 The dimensions of the round allow full compatibility with existing AR magazines, and are also able to retain the full capacity. Also, by choosing a smaller case head diameter, the rounds maintain compatibility with a standard-sized bolt. As a result, the only necessary change from a standard 5.56x45mm setup is the barrel.

One 300 BLK barrel that has thoroughly impressed us here at Wing Tactical is the Odin Works 300 AAC Blackout Barrel. Made from Grade 416 stainless steel and put through a thorough button rifling process, the barrel also features 5/8-24 threading to allow for the attachment of a muzzle device without additional machining. These barrel also include a low-profile Gas Block to help ensure that you have everything you need to get started.

What to Know before Building for 300 AAC BLK

While 300 BLK does have many great advantages when compared to 5.56x45mm, there are a few things to consider before investing in a 300 BLK setup. The first is cost. Because the 300 Blackout cartridge is still relatively new to many shooters, the prices are still at somewhat of a premium for these cartridges, though prices are likely to drop as the cartridge continues to grow in popularity. In addition to this, 300 BLK rounds are not yet as widely available as the standard 5.56x45mm rounds, so you may not be able to purchase them if they are needed at a moment’s notice.

The type of 300 Blackout ammo you should select depends on how you intend to use it. While some shooters can get by with a low-price, less precise product, others require a more accurate cartridge that provides specific capabilities.

If you’re looking for a powerful, versatile option for your next custom AR build, 300 AAC Blackout is definitely a great choice to consider. Take a look at our full inventory of custom AR-15 parts toady, and don’t hesitate to contact us if you have a question about one of our products. Then, when you’re ready, place your order and give yourself an edge!