Note: For standard Mil-Spec AR-15 only. Not rated for suppressors and/or full auto fire. Not for use on SBRs or pistol length barrel.

Strike Industries prides itself on bringing new products to the small arms market that are not just novelties, but true innovations that surpass the functionality of those components that they replace. Everyone and their brother’s cousin’s sister’s uncle makes an ambidextrous charging handle, so Strike knew they had to do more than just introduce another handle that worked from either side, they needed something that no one else had done, or it just wasn’t going to be good enough. When their designers came up with the Strike Industries Latchless Ambidextrous Charging Handle they changed the game entirely.

The Latchless Ambidextrous Charging handle has no traditional external latch and works equally well operated from either side. The secret of the is an internal latching mechanism, which not only functions intuitively but allows longer service life by spreading wear and stress over a larger area within the insertion slot in the charging handle channel rather than the traditional 90-degree edge catch on most charging handles.

The Strike Industries Ambidextrous Charging Handle is designed for the Mil-Spec AR-15 platform. It’s forged from quality 7075 T-6 aluminum and features a smooth design that won’t catch on other things during handling, yet provides ample mounting space for accessories like the AR-SIR which allows for easier operation with large optics mounted or while wearing cold weather gear.

Whether you have large hands or you need to work around sizeable long range optics, the ISO Tab gives you the extended gripping surface you need. ISO Tabs also feature a deeply grooved gripping surface for a solid, no-slip grip with gloves on and in harsh weather conditions.

**The Strike Industries Latchless Ambidextrous Charging Handle is not intended for use on short barrel rifles, or pistol length rifles and is not rated for fully automatic use or for use with suppressors. 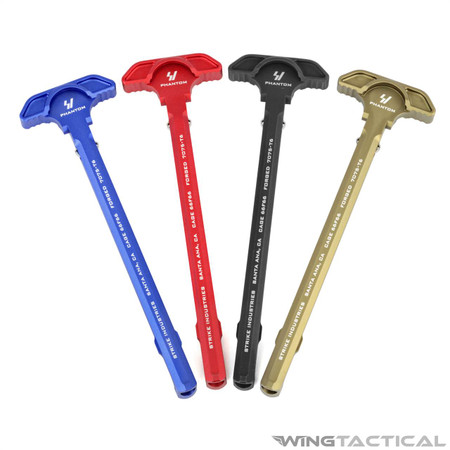