Upgrading and building AR-15s requires what feels like a million tiny springs and pins when you try to sit down and list them all. Worse than that if you were to forget to order something, one little spring is liable to hold up your whole build for days while you place another order and wait for shipping. When you’re ready to do a lower build the best move is to buy an AR15 Lower Parts Kit. One of the best options out there for a complete AR lower parts kit is the Strike Industries Enhanced AR-15 Lower Parts Kit. With this one you get all the parts you need to assemble a complete AR-15 Lower, all you need to add is the pistol grip and trigger guard.

The Strike Industries Enhanced AR-15 Lower Parts Kit includes all of the upgrade parts offered in Strike’s Builder’s AR15 Lower Parts Kit plus a complete fire control group featuring the superior quality of Strikes Investment cast trigger and hammer. These components are precision machined, heat-treated, precision ground and phosphate treated. Strike presents the complete package with all of the parts needed to give you the best shooting experience available in a comprehensive AR Lower parts kit.

The Enhanced parts included in the Strike Industries Enhanced AR-15 Lower Parts Kit allow you to operate the mag catch and bolt catch with the added confidence of improved grip on the operating surfaces of both. The kit also includes all of the Enhanced parts in and upgraded Strike safety selector as well as premium upgraded Pivot and Takedown pins. Yes, you could say it, it’s all that. 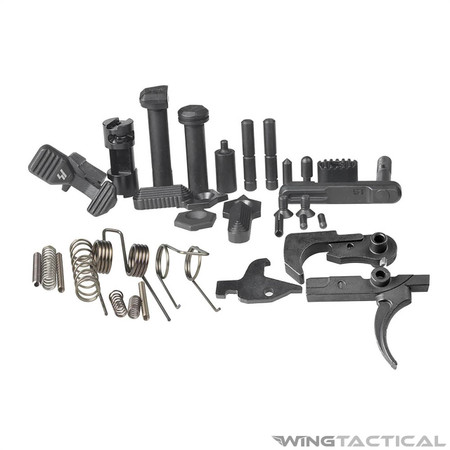