Have you ever had a magazine just fall right out of your AR-15? At the range it’s embarrassing, in a competition it’s costly, if the performance of your weapon means life or death well, I would rather not go there. Anyway, there are a few things that could cause an AR-15 mag release to malfunction. For instance, the lower receiver could be slightly out of Mil-Spec. The magazine itself could be the problem if it’s of lower quality or worn. The most common culprit is the AR-15 magazine release assembly itself. To avoid this possible disaster, the first line of defense is to install an Ascend Armory Magazine Catch and at least you can be sure that isn’t the core issue.

Why Won’t It Just Stay There?

Many factory mag release buttons are notoriously difficult to engage. Additionally, the factory mag catch could be worn or just barely able to engage in the first place. The sole purpose of a magazine catch is to solidly engage the magazine with no possibility of disengagement until it’s purposefully released by you depressing the AR-15 mag release. Simple enough, however, why won’t your mag stay put?

If the factory parts work for you then cool, keep them. If you’re having a problem, then you need a reliable AR-15 magazine release assembly. Life isn’t a movie where an extra loaded mag is always in your back pocket, you just can’t drop magazines everywhere and grab a spare. If you want fumble free mag swaps, that stay locked in until you decide to let them out, then simply put in an Ascend Armory Magazine Catch. 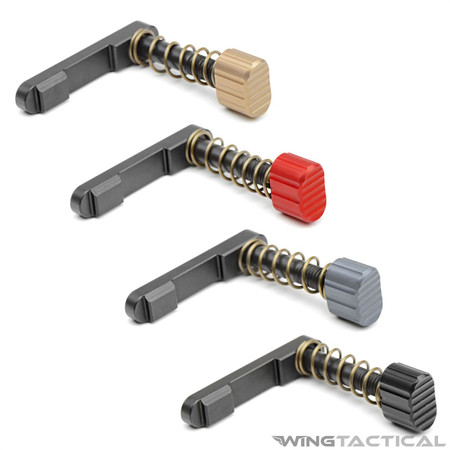