When you build a new weapon system you want everything to be just right. You don’t want to find that there was something small you could have done to make everything work better and have to go back and fix it later. This is your build and you want to do it right the first time. Something as small as an inferior buffer tube castle nut can take you from the range to a prolonged limbo on the workbench while you wait for a replacement. If you want to skip the hassle, choose your castle nut wisely. The Forward Controls Castle Nut offers a number of improvements on the traditional TDP AR castle nut without trying to reinvent the wheel.

The Forward Controls Buffer Tube Castle Nut is the next evolution in AR castle nuts. The gang at Forward Controls changed a couple of things on the design before they machined their 4140 steel castle nut. The biggest changes have to do with the staking “notches” of the castle nut. They’ve changed the number of notches to 4 from the traditional three, this just makes it easier for you to access the notches you need when you’re actually going to secure the nut in place. The angle of the staking notches has also been changed from 45 degrees to 30 degrees which makes the notches longer and deeper. They’ve also added some fairly coarse serrations on the wrench contact surface of the nut so that you can get a little better purchase when you install your castle nut.

The Little Things Mean a Lot

Forward Controls specializes in making the small changes that provide the shooter with great improvements to the interaction with his firearm. When you’re comfortable and find it easy to assemble and operate your weapon, you’re naturally a better shooter. 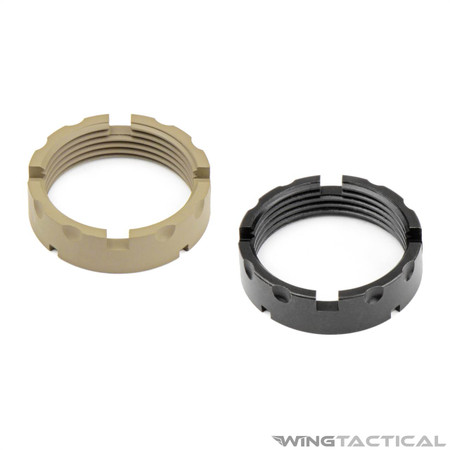