*This stock might fit loose/rattle on some buffer tubes.

It doesn't matter how many years of experience you have as an operator. There's one thing that will hang you. Your rifles sling can kill you. Whether you're exiting a vehicle, transitioning to another weapon, or maneuvering the terrain, that stupid sling is a pain. That is, until now. The patented WMD Guns SlingStock is the tactical answer to a practical problem.

Install the WMD Guns SlingStock on your existing MIL-Spec buffer tube. You press the release and slide the SlingStock on your buffer tube. Well now, that took about a second. You have seven feet of military-grade web retracted inside the compact stock. Press the web release lever, pull out as much as you need, sling-up, and it's game on. That took about two seconds, and your firing hand never lost control of your weapon. The controls of the collapsible, revolutionary WMD Guns SlingStock lie on the centerline. This stock is streamlined and fully ambidextrous. You will deploy, operate, and stow like a seasoned pro.

The WMD SlingStock Elite is identical to its brother, with one exception. The QD swivel is attached to a Picatinny block at its base. Now the standard version is fine if your gun has a QD swivel mount where you need it. However, if you run a picatinny rail on your weapon, the SlingStock Elite has just made your life a lot easier. It's much faster to slap this on your picatinny rail than to hunt for that little QD hole. The sling system on either model retracts when you want to run slick. Both models have a rated breaking strength of 800 pounds. So, pick one and run with it. 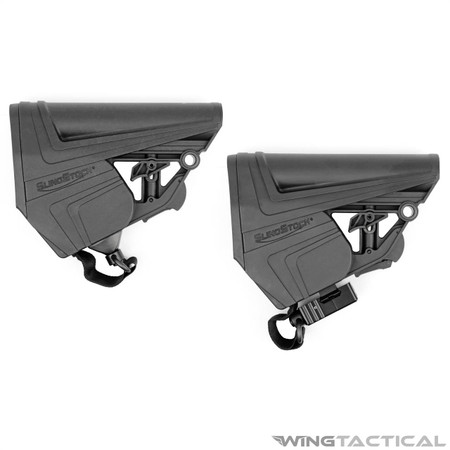