*The CompMag has been designed to conform to the law as written in (2016) SB880 which define “fixed magazine” to mean an ammunition feeding device contained in, or permanently attached to, a firearm in such a manner that the device cannot be removed without disassembly of the firearm action. At this point it has not been endorsed or approved by any law enforcement agency or regulatory body within the United States, due to their reluctance to endorse any compliance products. Even though CompMag, LLC. have had their Firearms Attorneys approve this product as a fixed magazine according to California law, your situation may be different. For example, putting a CompMag on a banned AR-15 or a short barreled rifle (SBR) will not make it compliant. Know your local/state laws and regulations prior to purchasing this product. If you are unsure whether or not you have an assault weapon, please contact a firearms attorney. CompMag LLC. and Wing Tacatical LLC are not held responsible for injury or damage from inaccurate assembly, misuse, illegal use or modification of this device, nor are we held responsible for your understanding or interpretation of the laws and regulations that may apply.

*NOT compatible with lowers that have a custom or extended magazine well. (such as Seekins SP225, Sharps Bros, and Spike's Jack.)

*NOT compatible in bullpup firearms such as the Tavor as you cannot separate the receiver to remove the CompMag.

*NOT compatible with top loaders such as the MA loader or the Bear Flag Defense loader.

Do you love the state you live in but hate the somewhat questionable gun laws imposed on honest shooters? Well, join the crowd. Many states laws regarding exactly what constitutes an assault weapon hinge on the presence of a detachable magazine. Here's your chance to keep the features on your AR the way you want them and abide by those laws without permanently modifying your AR. The CompMag AR-15 fixed magazine kit is all you need to make this happen.

First of all, you don't want to functionally change the way your rifle runs. You like the pistol grip, the flash hider, the retractable stock, however, some states label your range rifle an assault weapon simply because it has one of these plus a detachable mag. CompMag has created a California legal AR magazine that you can quickly install and squash their arguments, at least for now. This little beast behaves like an AR-15 fixed magazine yet still lets you reload without fumbling for hardware and taking up too much range time.

Keep Your State and Your AR

I know that family, jobs and even simple stubbornness play a role in living where you want to. Some states require an AR-15 fixed magazine for any other neat toys to appear on your gun. So, simply get a CompMag AR-15 fixed magazine kit, drop it in in minutes, and shut them up. There's nothing long and drawn out about getting it going. You just remove the upper, drop in the CompMag component and then there's just one retainer plate and screw. That's it, now you have a California legal AR magazine that looks better than the standard mag. 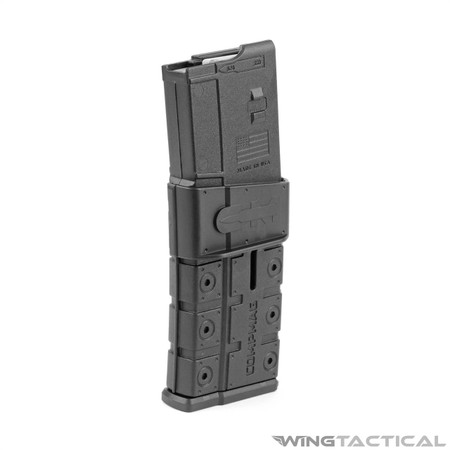