*May not work with TXG model due to tight tolerance

Since the military adopted the P320, its popularity in the civilian market has skyrocketed, and forearm parts manufacturers have started making some really cool parts and accessories for the Sig Sauer P320.

If you are looking to improve the ergonomics of your Sig P320 and make reloads easier, you should consider installing the Tyrant Designs Sig Sauer P320 Extended Magazine Release. This extended magazine release is easy to engage, even for people with smaller hands. It allows shooters to make their reloads faster, as they don't have to shift their grip to hit the magazine release.

The magazine release button on this extended magazine release is textured with a chevron pattern. Its edges are also chamfered and smoothed out so that despite being longer, it doesn't snag on anything on the draw and can fit standard holsters.

Using the Tyrant Designs Sig Sauer P320 Extended Magazine Release is an excellent way to add to the aesthetics of your pistol. This extended magazine release is available in black and gold finish. 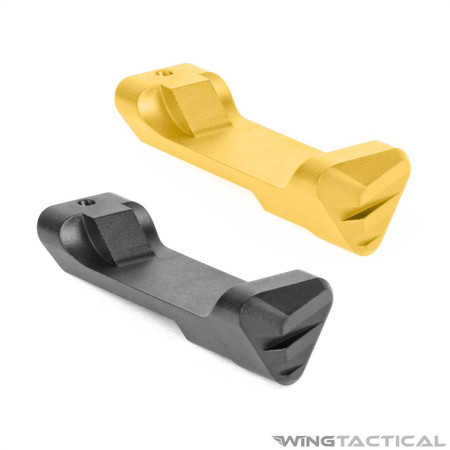