Owning an AR-10 rifle with full features in California is a distant dream for most. However, there are ways in which you can make your AR-10 California Compliant, which keeps the pistol grip, collapsible stock, and other features as well.

If you have a fixed magazine that can not be removed and replaced without disassembling the rifle, you can have all the features on it, and it won't be illegal. Though many people opt for a standard magazine lock, there is a much simpler solution that helps with faster reloads—introducing the Juggernaut Tactical Hellfighter California Compliant AR-10 Mod Kit.

This kit includes a modified rear takedown pin assembly and magazine lock. The new takedown pin assembly can be pressed, and it will slightly separate the upper and lower receiver to the point that the fire control group intends to engage, and the rifle can not be fired. This also frees the modded magazine lock, which keeps the magazine fixed in place. Once you have replaced the magazine, you can simply push the barrel up to close the receiver and have a fully functioning AR-10 with a fixed magazine.

This is the simplest and fastest solution to get a California-compliant DPMS profile AR-10 that can be reloaded quickly.

*Know your local/state laws and regulations prior to purchasing this product. If you are unsure whether or not you have an assault weapon, please contact a firearms attorney. Wing Tacatical LLC are not held responsible for injury or damage from inaccurate assembly, misuse, illegal use or modification of this device, nor are we held responsible for your understanding or interpretation of the laws and regulations that may apply.

*As of 2017, the California definition of a “fixed magazine” was changed from having to use a tool to something that requires disassembly of the firearm action. 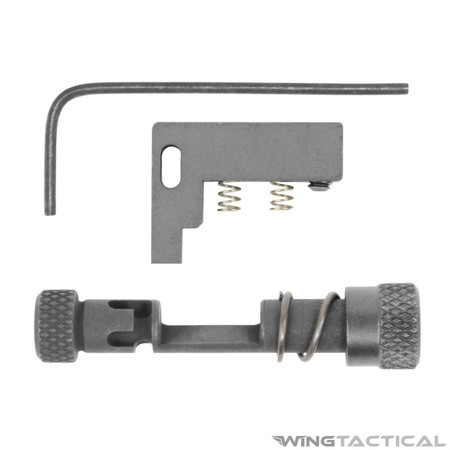