As you probably know, California probably has the most restrictive gun laws in the US, and owning an AR-15 in California can be quite challenging. You need to have a featureless rifle in California, which means it can't have a pistol grip, collapsible stock, forward vertical grip, and other features. However, according to the California law, if you have a fixed 10-round magazine that can't be removed without disassembly of the rifle, then you can legally have all the features on your AR-15, with the exception of suppressors and items like grenade launchers.

Well, Juggernaut Tactical has introduced their Hellfighter California Compliant AR-15 Mod Kit, which allows you to have a fixed magazine that you can reload very quickly. It consists of a takedown pin assembly, which replaces your rear takedown pin, and a modified magazine lock that keeps the magazine locked until the rifle is disassembled. The rear takedown pin is designed so that when it is pressed, it slightly separates the lower receiver from the upper, technically disassembling the rifle to the point when it can not function. So now, you can easily remove the magazine and replace a new one, after which you can simply push the barrel up to lock the rifle again.

This is the simplest way to make your rifle California compliant while retaining all of its features and having the capability of way faster and simpler reloads than a bullet button.

*Know your local/state laws and regulations prior to purchasing this product. If you are unsure whether or not you have an assault weapon, please contact a firearms attorney. Wing Tacatical LLC are not held responsible for injury or damage from inaccurate assembly, misuse, illegal use or modification of this device, nor are we held responsible for your understanding or interpretation of the laws and regulations that may apply.

*As of 2017, the California definition of a “fixed magazine” was changed from having to use a tool to something that requires disassembly of the firearm action. 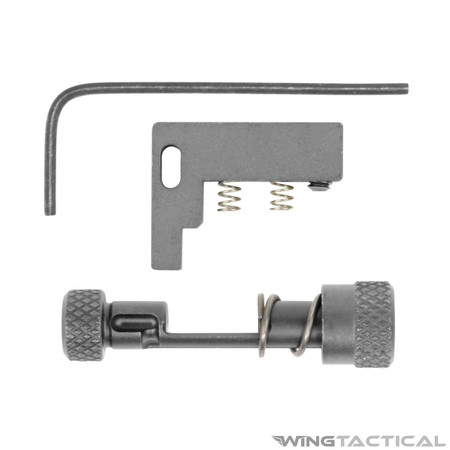