*Will not work with Armalite AR-10

When you consider the combination of the heavy recoil, along with repeated takedowns for even routine cleaning you have to wonder the kind of wear those old steel takedown pins endure. So, instead of replacing them on a schedule you need to only replace them once, with a set of .308 titanium takedown pins by V Seven.

They’re Better Than They Have to Be

V Seven Weapon Systems has designed a set of AR 308 takedown pins that far exceeds the strength and performance of factory steel takedown pins. V Seven has set the bar high, not for bragging rights, but for your safety and confidence in a product that is built to last. Your new .308 titanium takedown pins are machined to exacting tolerances for a perfect fit to accentuate your perfect build. Furthermore, you can forget standard, they meet and exceed your expectations for such a critical component of your AR.

No Rust for The Weary

Standard AR 308 takedown pins are simply steel, I don’t care how they’re coated or treated, at the core of the matter you have plain old steel. The greatest enemy that any steel faces in this world is its’ arch nemesis corrosion. V Seven Weapon Systems craft their AR 308 takedown pins out of titanium, which by the way, doesn’t succumb to corrosion. If you combine that and the fact that titanium weighs in at about half of what steel does, then you just batted a stand-up double. So, order your V Seven weapon Systems .308 Titanium Takedown Pins today, after that, you don’t have to sweat the small stuff any longer. 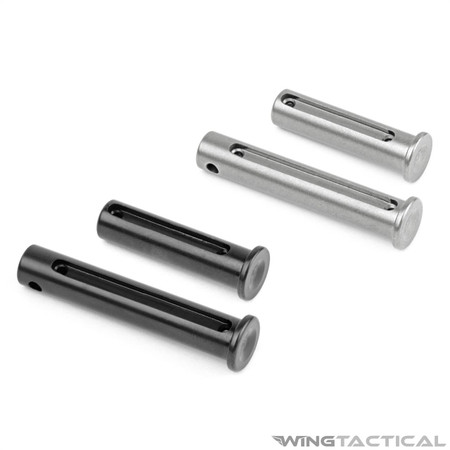