This AR-15 16-inch mid-length upper assembly is a great value. At its heart is the Spikes ST-15 upper receiver. The Spikes ST-15 is designed to be a go-to upper for law enforcement operators. Since the good people at Spike’s believe we all deserve the same great products at great values, it’s available to everyone. This Spikes Tactical upper is an aluminum body receiver which features extended M4 Style feed ramps, a Mil-Spec forward assist and ejection port door. The outer surfaces of the receiver are properly treated with Mil-Spec coatings to protect them from corrosion in real world situations. In order to ensure free operation, the inner surfaces of the ST-15 receiver get a slick coat of Dryfilm lubricant.

When you get to the full government profile barrel in this bundle, you know you’ve got your hands on a component that’s built to last. The Spikes Tactical government profile barrel is a full-bodied Chromoly Vanadium Alloy barrel that features a hard chrome lined chamber and bore. In addition to high-pressure testing and magnetic particle inspection, Spikes checks the head space on all of these barrels post-plating so you can be sure everything is going to be perfect when you put it in service and for thousands of cycles to come.

The feather in the cap of this tough customer is the BAR2 rail system. The BAR2 rail is an oversized extruded unibody quad rail large enough to give the biggest paws a comfortable grip. Extra inner diameter leaves plenty of space for your chosen gas block or a suppressor that sits back under the hand guard. The BAR2 won’t grate your hands like a lot of other rails. It features a scalloped design that protects the shooter and looks impressive on the range. The BAR2 rail isn’t just a pretty poser either. It’s crafted of sturdy 6061 T6 Aluminum making for a stout hand guard that won’t drag you down.

The Spikes Tactical ST-15 LE 16 Mid-length upper package with government profile barrel and BAR2 Rail is a great value. Skip the preamble and chose one of these husky cores for your next rifle build. You don’t have to tell them what you paid. 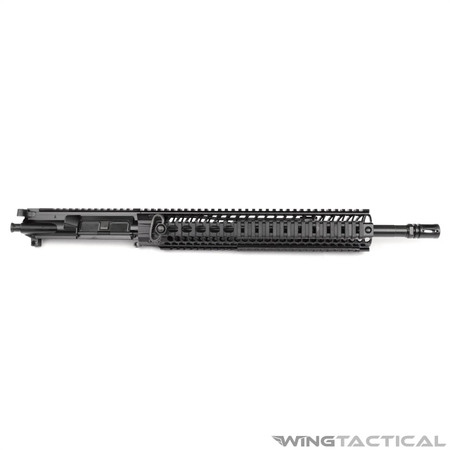