Everyone has his own style, the armorer is no different. Some guys are partial to lightweight builds, others think they need oversized everything to look tough at the range. If you’re partial to a stout barrel, but you like your rail a little lighter, Spikes Tactical has a combination package for you. Spike's Tactical offers a 16” mild-length upper assembly that features a professional grade Spikes Tactical Upper with a solid 16-inch government profile barrel and a lightweight SAR3 to make your AR fantasies come true.

Spikes ST-15 upper is lined with Dryfilm lubricant to ensure smooth operation for many cycles to come. While interior coatings provide long term lubricity, Mil-Spec external surface coatings protect the rest of the receiver from corrosion under real world conditions. Extended M4 feed ramps keep shells loading smoothly. Spikes ST-15 was designed with Law Enforcement operators in mind and Spikes makes it available to everyone complete with their lifetime warranty.

Spikes Tactical 16” mid-length upper package features a husky government profile barrel machined from a hearty Chromoly Vanadium Alloy. The barrel is chambered to NATO 5.56 and the chamber and bore are lined with hard chrome for accuracy and long lasting performance you can count on. The head space is checked after plating to ensure a precise fit. In addition to high pressure testing, each barrel undergoes magnetic particle inspection so you know you can trust it to stay true for thousands of cycles to come.

The Spike’s Tactical SAR3 is an extruded unibody rail made from 6061 T6 aluminum. It features the same scalloped rails that give Spikes BAR rail so much character and save the operator’s hands, but it’s trimmed a little lighter. The SAR3 lends an aggressive edge to Spikes Tactical Upper and installs easily with Torx screws so you can get from the bench to the range quickly. Multiple quick disconnect sockets allow you to detach you QD sling easily, even in the field.

When you make the Spikes Tactical upper assembly the backbone of your next build, you’ll get everything you need to give your new rifle a great start and the quality components will assure years of hassle free service to come. 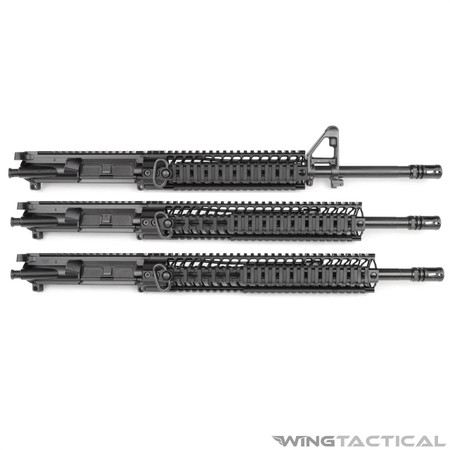