When you’re ready to choose the components for your next AR-15 build you’ll have a lot of decisions to make. If you need a mid-length upper assembly to begin your build Spike’s Tactical offers this upper assembly with a cold hammer forged barrel, quality upper receiver and rail system for a value-added group it’s hard to beat. The Spike's Tactical ST-15 Upper 16" Mid-Length 5.56 CHF Barrel with SAR3 Rail package will give you a lot of bang for your buck.

Start it off with the Spikes Upper. The ST-15 is a quality aluminum upper designed for tactical use by the law enforcement community. It features M4 feed ramps for performance you can count on even when circumstances are compromised. This Mil-Spec upper includes a Mil-Spec forward assist and an ejection port door that are both finished with the correct Mil-Spec coatings to ensure a long life in the field regardless of the punishment your dish out to them. In addition to corrosion-resistant outer finishes, the interior of the Spikes Upper Receiver is lined with Dryfilm lubricant for long term lubricity and easy operation.

The barrel included in this upper assembly is Spike’s Tactical CHF barrel. These barrels are super durable due to the cold hammer forging process is a work hardening process. This creates a superior barrel capable of more than 20,000 rounds in service. CHF barrel blanks are worked on a mandrel which features a rifled face. After working the barrel comes away rifled with a 1 in 7 twist. Due to the forging process, the rifling in these barrels is as tough as it is accurate. The interior of these barrels is finished with a thick layer of hard chrome as prescribed in the Mil-Spec guidelines for the M249 SAW, a coating almost twice as thick as the coating called for in the Specs for the M4. The exterior is finished in Mil-Spec Black Phosphate. The final product is a barrel that you can have confidence in wherever you shoot.

This Spikes Tactical ST-15 Upper 16" Mid-Length 5.56 CHF Package is completed with the Spikes Tactical SAR3 Rail. Spikes SAR3 Rail is similar to the popular Spike’s BAR rail. The SAR3 is a one piece extruded rail that easily attaches with a barrel nut and Torx screws. The SAR3 is lighter than the BAR rail but still offers comfort and convenience to the operator. Multiple QD sockets and scalloped rails make the SAR3 rail an easy choice for those who want a hand guard that they can hold comfortably without giving away too much mass.

When you choose a Spike’s Tactical Mid-length upper assembly you’re choosing the backbone of a great American Weapon system. The AR-15 you build with this bundle at its heart will be one you can carry with pride for years to come. 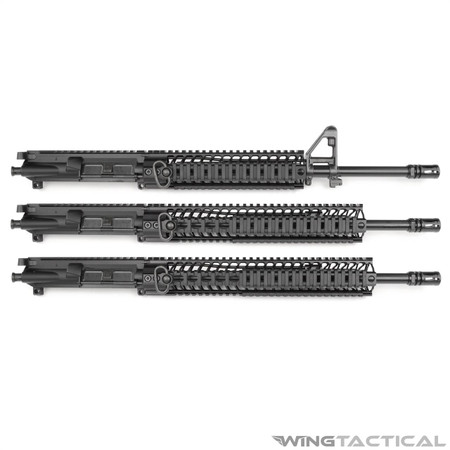